We arrived in Joshua Tree squeaky clean – after spending Thanksgiving at home in Glendale, where we took the time to make a few tweaks, tackle some fixes and a conduct a general “clean up” (of us and the rig). The drive to Joshua Tree was a little over two hours and if you are coming from LA, either the West or North entrances will do. Joshua Tree is small enough (relative to some other NPs) that it’s worth trying drive through and hit all its corners as you plan your itinerary.

We believe we found the best site ever in Jumbo Rocks campground: #77. With an unobstructed vista of rocks and sand and desert scrub, and of course Joshua Trees. 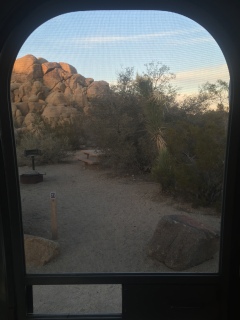 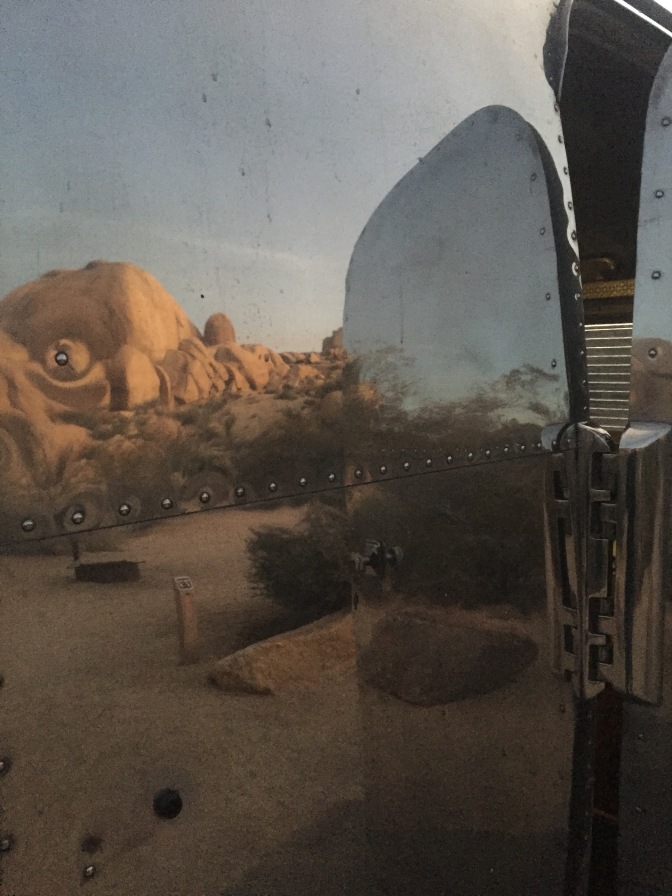 Many of the sites there are tent-sized only, which leads to a good mix of tent campers and RVs (alas they do allow generators here at fixed times). As the sun was setting we took a walk. 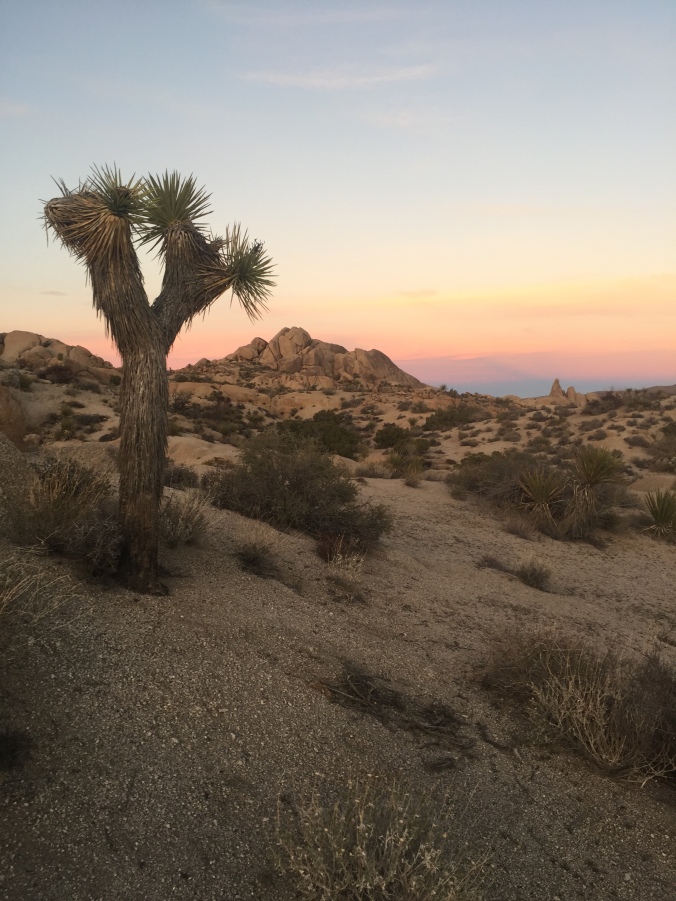 Ben and I passed the camera back and forth seeing who could take the best pictures. They are all winners, don’t you think? 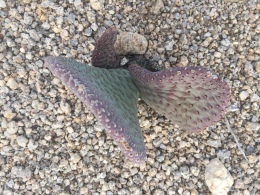 Dinner was all the food I had bought intending to cook while at my parents, but didn’t. You see, if I left it there, my parents wouldn’t eat it. You know? Salmon, collards, rice and sweet potatoes. 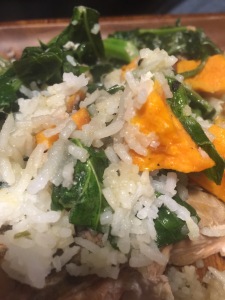 Mostly from Trader Joe’s, which, if I had to choose only one place to shop for Airstream cooking, would be the winner. Thank you mom and dad for stocking our fridge.

We watched the Caine Mutiny b/c some scenes were filmed in Yosemite. (Make no mistake, there is no cell service in JT, but we had downloaded it at my parents’ over the weekend.) It was a brief (and corny) scene but otherwise good movie. Got us thinking that would be a fun theme to follow – other movies filmed in National Parks. Any recommendations?

We woke to another sunny temperate day in California – but the first we’d had camping in several weeks! There is really nothing better. Here I am 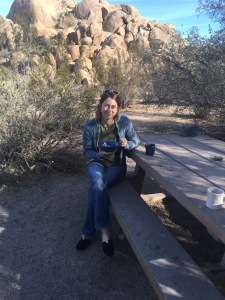 breakfasting outdoors – something we haven’t done in a while. Our breakfasts can get pretty routine, but I love them all: it’s either cereal, oatmeal or eggs. This must have been a cereal or oatmeal day. The only downside is Ben and I have to eat the same thing – due to just wanting to avoid two people in the kitchen, extra dishes, etc. Oh, what we give up to go on a once in a lifetime cross country trip!

We bopped over from the east side of the park to the West Entrance Station visitor’s center, which was small but staffed with super helpful rangers. They also had one of the coolest exhibits I have ever scene – a look inside the creative process behind the design of park PSAs. The PSAs were meant to promote appropriate park behavior to various types of visitors – the ad below is a mock up of the one aimed at campers. The “behind the scenes” revealed the editors wanted to be sure to pick a picture that included a tent and an rv/trailer. I don’t know how well this translates, but the English teacher in me just loved it and hats off to the staff for sharing it. Compare the draft up top (with editor’s notes) to the more final version below it. 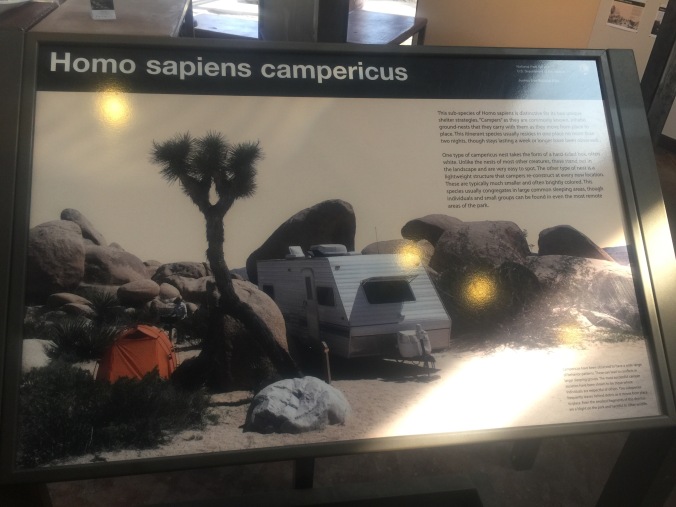 After consulting with a ranger, we set a course to do several short hikes as we crossed the park from the West Entrance, past our campground, toward the south entrance. If fact, you may want to start calling us “Short Hike Barkers on Break,” we did so many. Feel free to follow along (from left to right) on the map below.

First up, Hidden Valley. As the name suggests this expanse is hidden behind a ring of boulders. Rumor has it (not much confirmed historical fact in the stories here, but they are upfront about it!) cattle rustlers used to hide out here with their loot. 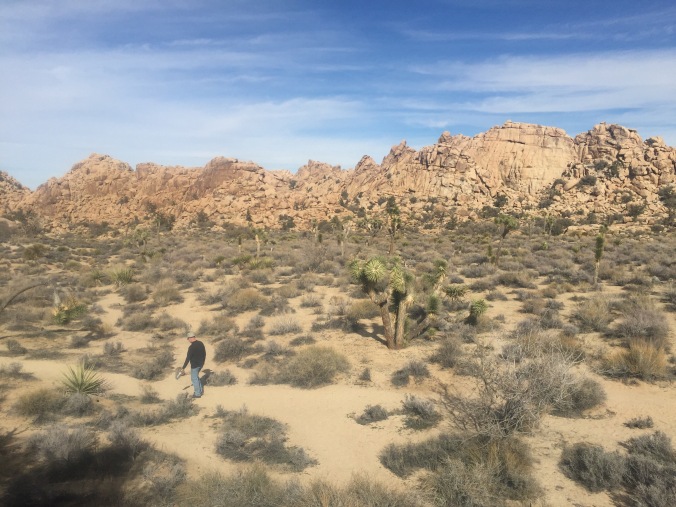 Can you spot Ben hiding in the valley?

You will see boulders and Joshua Trees, and other trees and all kinds of shrubs and bushes (technical terms anyone?). The walk here, as throughout most of the park, is on sand, like being on a beach. You will see climbers. More of Hidden Valley below… 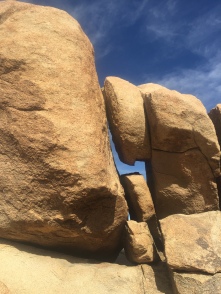 It was a clear day for the next stop, a drive up Keys View. You can see Palm Springs and  the whole Coachella Valley, and the Sultan Sea. Mexico too, they say, but hard to tell. Somewhere down there the San Andreas fault is biding its time. We ate our lunch on a bench overlooking the view.

The view from the aptly named, Keys View

Moving east, we hadn’t really planned on stopping at Ryan Ranch, but the adobe remains can be seen from the road and called to us. Much graffiti and ranch “trash.” Climbers too. Enjoy my artsy pics. 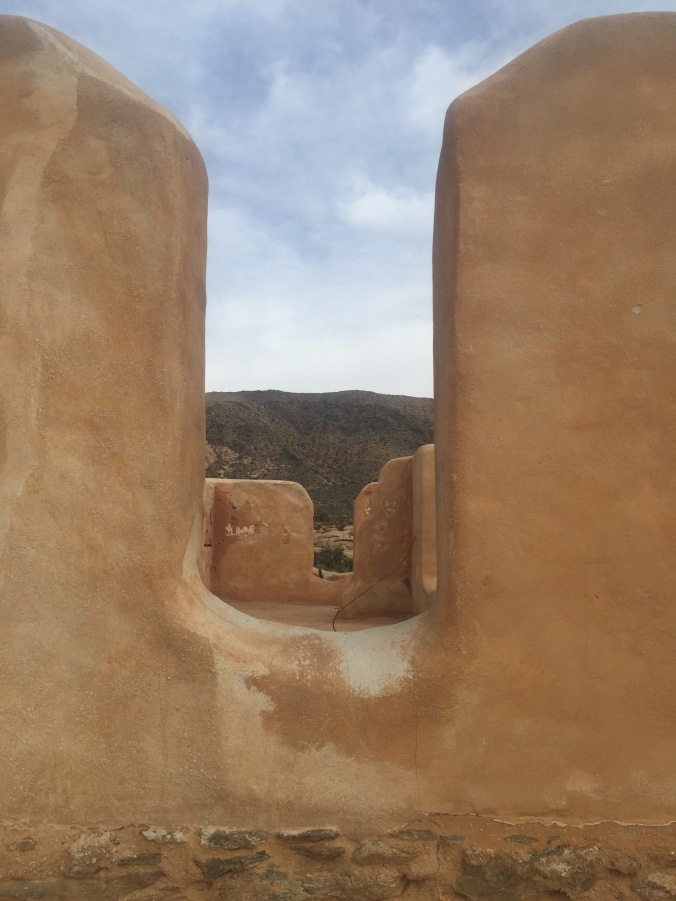 Next stop the Ryan Mountain trail head , not to hike the mountain (a “challenging” hike) but to see Indian Cave – not much of a trail but a cool

rock that has campfire smoke from who knows how many eons of campfires.

We met Hash the van-cat there as well. He reminde

d us of one of our cats, Gordo (who’s orange too).

When we told them about Gordo, Hash’s owners said: “Gordo! That’s such a great cat name!”

They were super hip, so we felt hip too. Not so hip to live with a cat in van though. Don’t worry, the windows were cracked and the temps mild. Shortly after this pic, he headed into the back for a nap while his owners hiked.

Moving east, Live Oak picnic site doesn’t advertise it-but if you drive a bit beyond the picnic tables on the dirt road you can see the growing, healthy live oak (below) for which the site is named. We hiked beyond it on a pseudo-trail and really enjoyed the views and the solitude and the ROCKS. If these pictures don’t convince you to sign our petition to rename this park “Joshua Trees and Rocks” then you are missing the big picture. 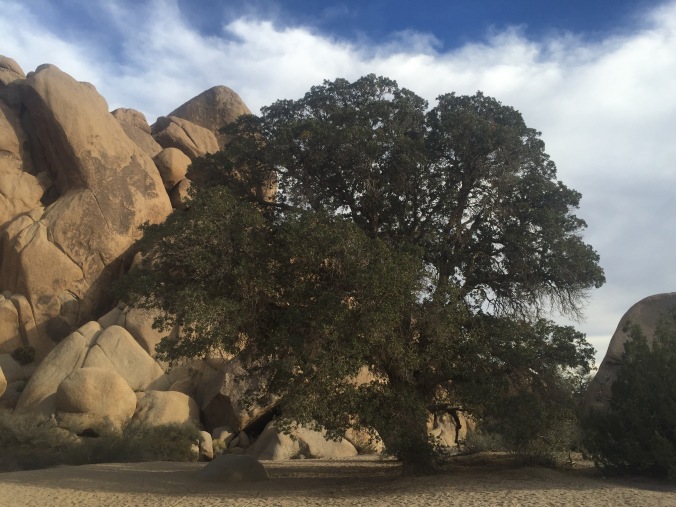 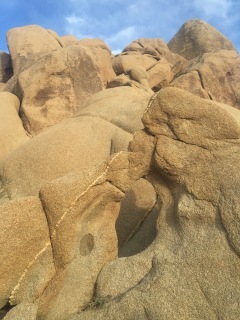 Finally, timed for sunset, a bit toward the South Entrance, we visited the Cholla Cactus Garden. You can really see the terrain change on this drive. It’s not gradual. It’s abrupt. And the cacti literally glowed in the sunset while the views of now the Colorado (as opposed to the Mojave) desert mountains were lovely. 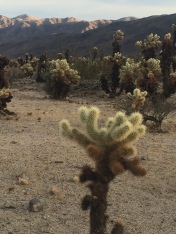 The next day we had a lazy-ish morning – Ben hiked around and I did yoga in the sand outside the trailer. I’ve done this a few times now – yoga outside is the bomb; yoga to combat aging muscles that spend a lot of time in the car is the bomb de bomb. From our campground, we hiked to Skull Rock – a popular spot, and sure enough someone offered to take our picture. See how relaxed I am from yoga? You’ll note I am holding my newly re-acquired fanny pack, which, unlike all my jacket pockets, is indeed big enough to hold my phone. It’s getting deployed a lot now.

We had signed up for the afternoon tour of the Keys Ranch. The Ranch sory was interesting enough, but I found the site just very visually striking – these dark strokes of lumber and piping and machines against the Joshua Tree browns and sands and blue sky etc. 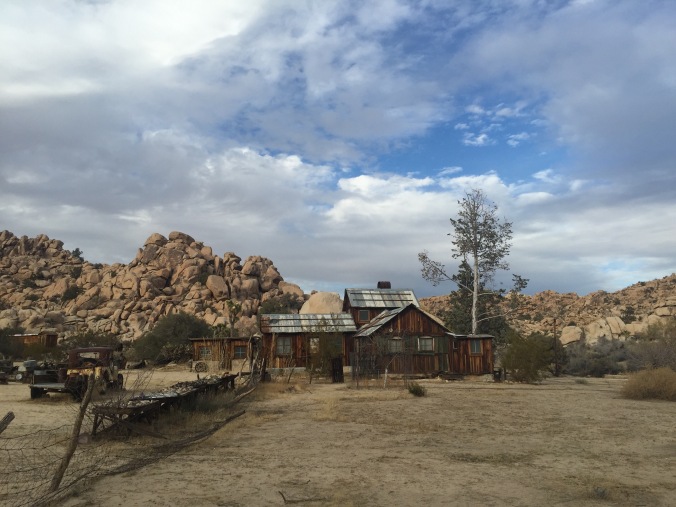 And though any kind of private tour seems at odds with the concept of a National Park, it did feel special to be there, and as though the Keys family had just up and left in a hurry, and here we were sneaking a peek. No neat and tidy site is this – it’s the sort of place they’d love to find on American Pickers. Junk everywhere. And the life story of the Keys family isn’t tidy either – for example when asked what Mr. Keys’ profession was, the guide replied “A little bit of everything” which is what it took to survive in the desert. Mr. Keys – actually ended up serving a

sentence in Alcatraz – I won’t spoil it by saying what it was for (think Wild West).  The oldest Keys son visited the site regularly until he died just this year. He will be interred at the family plot still on site. The tour cost 10 dollars, and is only offered three days a week, though they are popular enough that they will be adding some more. I imagine it’s a struggle for the hardworking public servants at NPS to have to limit access to such a cool part of the park.

The rangers have access to a Library/Archives onsite to help them research and show “past and present” like with this old photo of an area of the ranch.

Afterward, we had time for one final short hike – Barker Dam of course. It hadn’t been heralded in any of the hike guides we perused, but of course we had to go. And it was fantastic! Again, maybe b/c of the time of day. It was flat, with rolling hills and the most incredible site in the middle – a dam that was built and rebuilt by ranchers who lived and grew live things here in the desert!

A close up of the dedication left by the rancher-builders 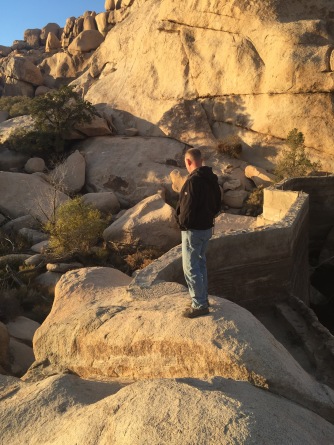 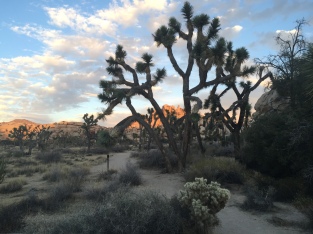 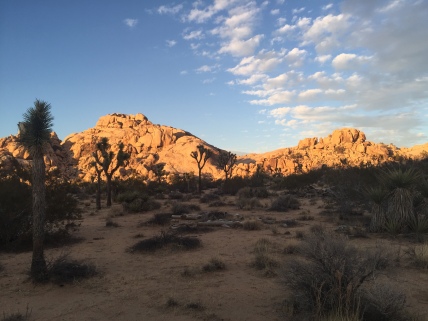 Joshua Tree was a great way to launch our time in the southwest. And, though doing a bunch of small hikes and seeing more doesn’t always feel like the right approach, it worked very well for us at this park.  Like the Joshua Tree itself, we avoided establishing deep roots in any one part of the park, and instead attempted to absorb as much as possible through a broader approach. 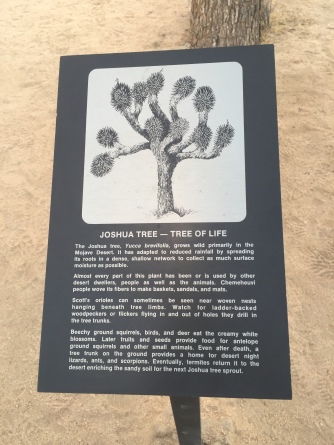 9 thoughts on “Joshua Trees and Rocks”