So August began with us hitching up the old Airstream again and heading to magical Rockland, Maine, where our friends the Sauters were renting a house for a few weeks. This was their front yard. 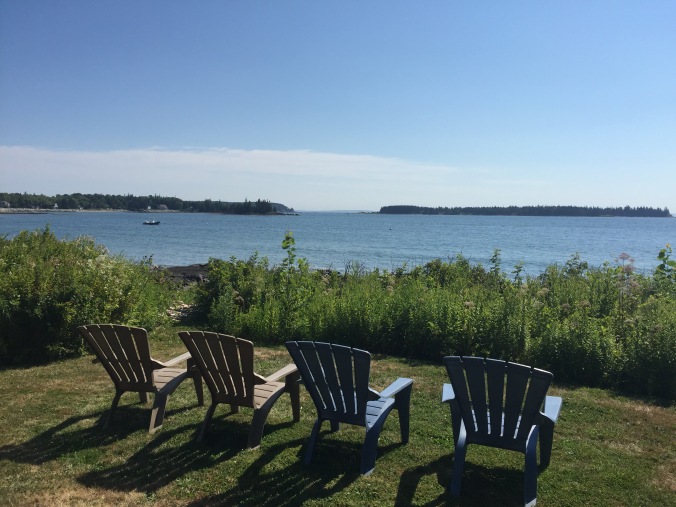 The Sauters are from Germany – we met them at Wooden Boat School a few years back and have gotten together several times since – mostly here in the US (where they travel a lot!) and once in Barcelona, which was super sweet too. Here in Maine, where they come so often, the shopkeepers and lobster men know their names. And they’ve made some other friends too, who joined us for an epic “bbq” featuring every fish in the sea. A blueberry snack cup, Owl’s Head Lighthouse, and Pale Ale named for a Civil War general (from Maine) were just some of the other highlights.We might have talked about US elections a bit too. 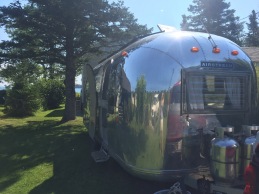 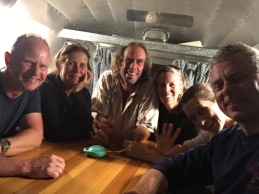 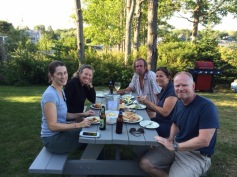 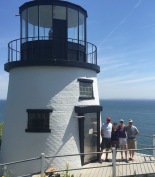 Next weekend I scooted down to DC to for a “Close Up” reunion. Close Up was my first job out of college, and these five women were some of my first friends. The amount of girl power, teaching, lawyering, journalisting, and all around awesomeness among this group is HUGE. True of all the friends I met there and through them. Here we are at my favorite breakfast burrito spot on Capitol Hill. You can tell by our glow how hot it was that weekend. 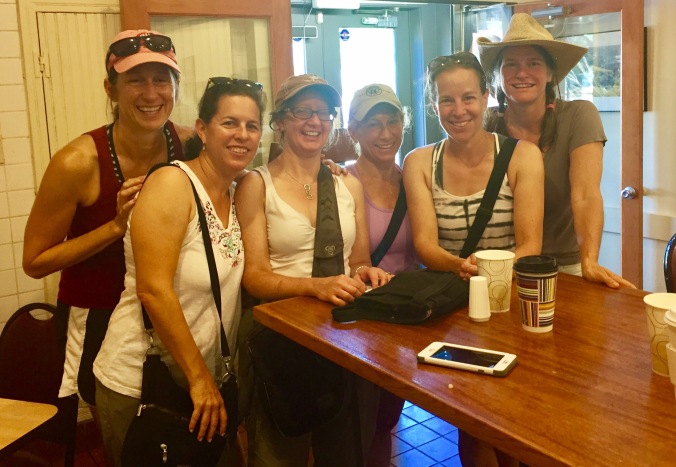 Let’s see…the following weekend, four STEELES come to visit us in Woodstock! Maxing out our guest bedrooms and more, my brother and his kids came for a fun-filled weekend of cooking, biking, hide and seek, whiffle ball, sight seeing, and most importantly rope swinging! We spent hours one day swinging into the Ottauqueechee River from a rope tied to an upper tree branch. When we’d mastered that, we moved on to jump off some rocks down river near the Simon Pearce store in Queechee. The next day the kids went back for more. 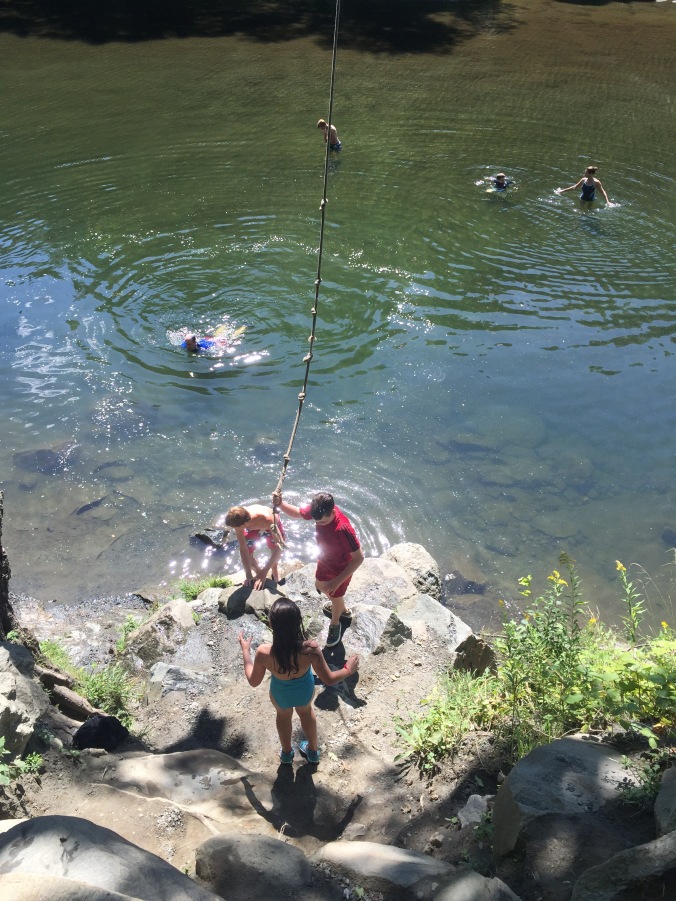 Other highlights included giving them all a tour of the mansion and a farewell picnic lunch on the grounds. 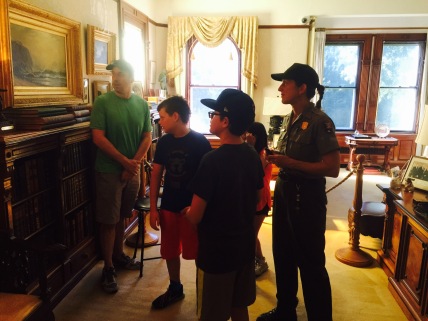 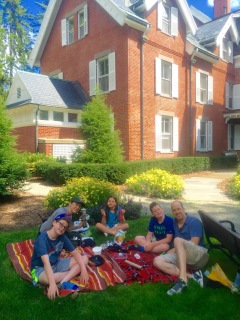 We capped off the month with a blockbuster visit to Boston to check out a couple of (wooden) sailboats that Ben has had his eye on. Before we had an Airstream, we had a boat and we will again some day. The one on the left was on the hard, but the one on the right was anchored. Though we didn’t sail, we did take a dinghy out to see it and it felt pretty nice to be out on the water. 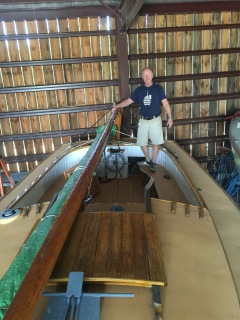 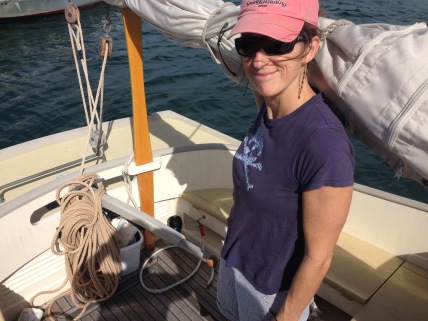 We stayed with my friend Amy and her awesome family who helped us plot our course to see TWO national historical parks on the way home:  first, the Adams National Historical Park in Quincy. Popular culture -HBO series, Hamilton (note my t-shirt) – have brought John Adams into prominence. In the midst of a very urban area, some geniuses and heroes have preserved these places. You can explore his early homes, and the one he shared with Abigail after they retired. There, at Plainfield, you can see the desk from which he wrote his reconciliation letters to Jefferson, and the chair in which he died (or took ill, I forget), his last words being “Thomas Jefferson still survives.” (Wrong!) I thank our awesome ranger who explained that Jefferson had been ill, so his health was on Adams’ mind. 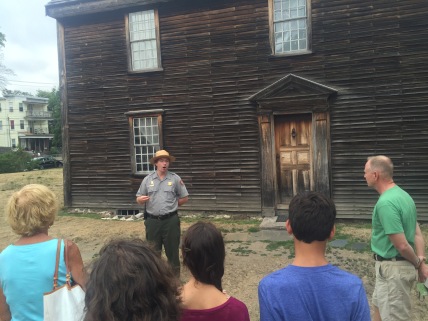 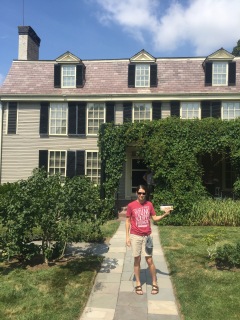 Then we made our way north to Lowell, MA and the Lowell National Historical Site. This site tells the story of the textile mills, the industrial revolution, and the New England and immigrant women who fueled it during its boom (1820s-40s). The entire town was built based on engineering the Merrimack River to produce maximum water power. Six miles of canals were dug and they are nearly intact today (our ranger explaining it all at left below).  In the middle, you see Ben next to one of the looms at which women labored for over 12 hours a day, 6 days a week. (Inspiring the first women’s strikes and union action in the 1830s). You can see (and hear) a video of the loom at work here, and get a feel for what an awful job it must have been. 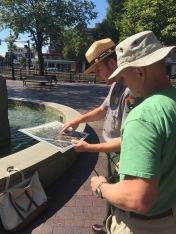 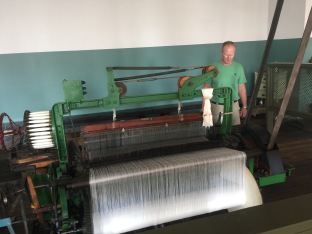 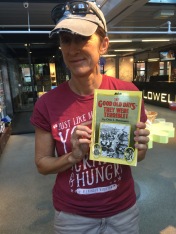 At work, I had been preparing to do the “Service Wing” tour. Understanding more about how the textile mills in New England shifted women’s opportunities (away from jobs as servants)  in the market economy  is just the kind of “days off” I like!

So that’s too serious a note to end on…so I will end with some pics of our family’s visit. Summertime! The same kiddos just celebrated (with their mom the superfan) the Cubs’ World Series victory last night! Woot! 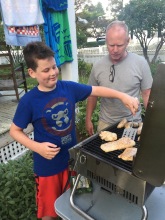 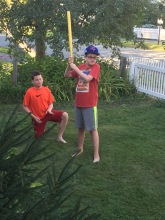 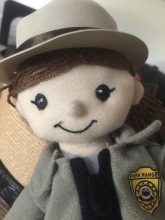 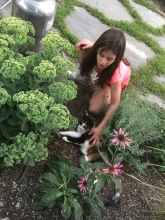