Though we had both read Undaunted Courage by Stephen Ambrose some years back, now that we were in the thick of Lewis and Clark historical country here in Idaho, it was time for a major review.

Spoiler Alert – that’s Meg at the top of Lemhi Pass

Meg bought a used copy, spent an evening or two in secluded study, then thoroughly briefed me – including long passages read verbatim – as we spent 2 1/2 hours on the road east to Lemhi Pass from our campsite on the Salmon River near Stanely, ID.

Lewis and Clark’s inaugural epic journey (see our area of travel on the left in the NPS map close up below) of course would have been from the east to the west.

NPS map of the area we visited

This is beautiful country here in the Bitterroots of Idaho and it’s easy to visualize the events Meg is reading about and the country Lewis and Clark saw: rolling, grass-covered mountains periodically giving way to rocky cliffs and spires, and the Salmon River winding through all of it with waters alternating between rapids and smooth, but still fast, water and banks lined with the yellow/orange of Cottonwood trees reaching their peak now that it is (was) late September.

Stephen Ambrose tells of how Thomas Jefferson, the real force behind the Lewis and Clark expedition, sent Lewis to be schooled by recognized experts in astronomy, botany, and other sciences so he would be as prepared as he could possibly be for his mission of discovery. Fascinating – it sounds like preparation for a space mission.

Suddenly Meg’s reading was interrupted as a magnificent Bighorn Sheep bounded across the road in front of us and I had to swerve to miss it. Fortunately, there were no other vehicles on the road; the scenery was utterly rural with few signs of human activity and we and the wildlife had the place to ourselves.

In Salmon, ID, we stopped at the Sacajawea Interpretive Center, which was closed, but we walked a mile or so through their very good outdoor exhibits: hay fields, replica tepees and sweat lodges and a streamside nature trail. The Interpretive Center is in the Lemhi valley, where Lewis and Clark went after crossing through Lemhi Pass. It is where Sacajawea’s people, the Shoshones lived part of each year, which made her valuable to the Corps of Discovery as a guide, and Ambrose surmises happy to return even under these circumstances, enslaved. We enjoyed this lovely setting, seeing the world through her eyes (she was captured at about age 12), with mountains in the distance, and the excellent exhibits about the natural world, the messiness of nature, the salmon lifecycle and the Shoshone life.

May be wishful thinking, but you just can’t help but think you get a bit of a view of the Shoshone world

Note, we did the reverse of Lewis and Clarks first trip, so another spoiler alert – they made it over the pass.

We got back on the empty highway leading west. The signs are small, and we almost missed the turnoff from the main road that led to the paved road leading to the rough dirt road that led to Lemhi Pass. One gets the feeling that only diehard Lewis and Clark nerds visit this place. But maybe it’s just that we’re here in the fall, after others have gone back to work and school. In any case, we began our ascent into the mountains past a few isolated ranches and some lovely cottonwood groves, pausing only briefly to let a herd of cattle pass in front of

us, watching them get coaxed along by a pack of dogs and a couple of guys on ATVs.

After perhaps 12 miles, we reached the top – Lemhi Pass and the Continental Divide, the geographical line to the east of which waters flow to the Gulf of Mexico, to the

west of which waters flow to the Pacific Ocean. It was at this pass in August, 1805, that Meriwether Lewis and a couple of others from the exploration party reached the top and got their first view of the long-anticipated Columbia River flowing west to the Pacific Ocean. Or at least that’s what they thought they would see as they crested the hill.

What they (and we) actually found on that hilltop was a lovely westward view of another mountain range, not the Columbia River Lewis and Clark hoped would complete their quest to find a navigable water route across the continent. For us, the view from the hilltop was sublime on this glorious autumn afternoon – rolling, grass covered hills in the foreground, magnificent mountains on the western horizon. For Meriwether Lewis, who had endured months of wilderness travel and was out of food, it must have been something altogether different. The Columbia River and an easy route to the Pacific wasn’t waiting for him; additional weeks of arduous travel were.

Remarkably, though, the view west from Lemhi Pass, the Great Divide itself, was essentially the same for us as it was for Meriwether Lewis! With the exception of the dirt road that led us to this spot, a distant power line or two, and the remarkably clean Forest Service pit toilet building off to the side, the scene was right out of the early 19th century. No visible development, no fences, no signs of humanity. Spectacular.

Lewis and Clark’s party had largely followed the Missouri River in their travels west from St. Louis, and Lewis was thrilled to locate the headwaters, or source, of the river here at Lemhi Pass. In his journal, Lewis talks of the “most distant fountain” of the Missouri, which he identified as a spring bubbling out of the ground about half a mile east of the top of the hill. We strolled down the dirt road and, sure enough, there 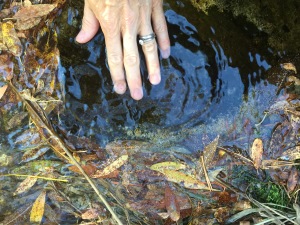 it was, surrounded by a rickety split rail fence (that we made easy work of). We both dipped our hands in the foot-wide spring (it was cold) and “straddled the mighty Missouri, one foot upon each bank”, as one of Lewis’ men took great pleasure in doing, and chronicling, 210 years ago. 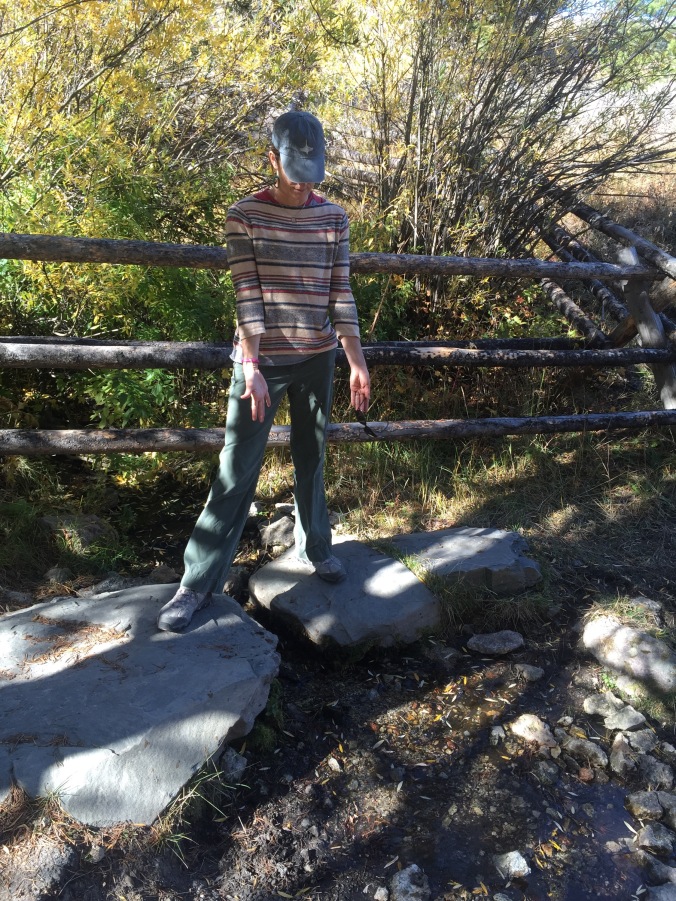 Note: This was a guest post by Ben Barker who does not like to use exclamation points, or begin sentences with contractions.