What do Boise, Stanley, Ketchum, (and wild card) Driggs have in common? Are they index of town listed under Idaho in Lonely Planet’s USA? No! They are our itinerary of Idaho towns we stuck around in long enough to have some notes to share. And with the exception of Driggs, they are featured in Lonely Planet as well, so we’ll see what we can add to the well worn path…

Boise was the first big city we have set a spell in on this trip- and it was one we deliberately wanted to check out. We chose the Riverside RV Park because it’s adjacent to the Greenway, 25 miles of paths that go along the Boise River. 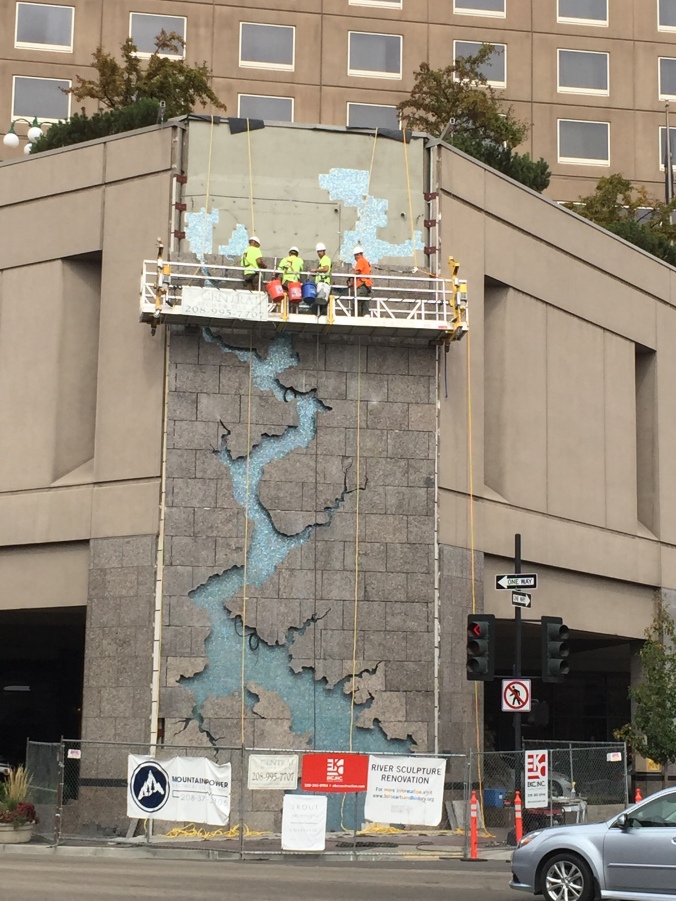 A piece of art depicting the Boise River, in progress of installation on a building downtown!

We planned to ride it into Boise the next day for an all day excursion, and so we drove into town our first afternoon to get a couple

Crowdsourced ideas for our visit!

bike parts and the lay of the land. I did a little crowd sourcing on Twitter – reaching out to Boise’s Visitor’s Bureau for suggestions – they replied! tagging others, which yielded even more ideas! Very cool.

Our main stop that afternoon was the Idaho state capitol building. It has been renovated in the last 5 years and literally glistened, it was so shiny and new. It was fairly empty, but there were some friendly tour guides, and a gift shop filled with potato-themed souvenirs. Reading the displays, you might come away thinking this about Idaho: they are proud of their early adoption of women’s suffrage; land and water rights are what gets the citizens and legislature riled up; Lewis & Clark went there. We were blown away that we could walk right onto the floors of both the House and Senate chambers – they weren’t in session, but still.

We are a little short on reading material – didn’t really plan ahead on all the time to read we’d have on this trip! So we went to The Redisovered Bookshop where we picked up a used copy of Undaunted Courage (very handy for our travels-Lewis & Clark have been everywhere) and a tip on where to go for a snack and what to get there. Indeed we very much enjoyed the Classic Poutine at Bittercreek Alehouse. The fried potatoes came with chunks of roasted turkey – my friends know well that I’m not scared of any carbs that come with a side of protein. 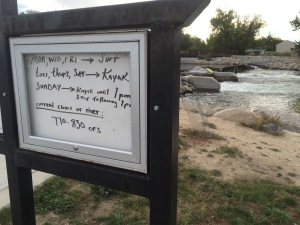 o town. The Greenway goes through neighborhoods,former industrial areas, under highways, a 9-11 memorial; even alongside a mini dam (see pic at right) that encourages kayakers and surfers to jump in and and catch some waves. We had to guess a bit as to where to “get off” but found ourselves exactly where we wanted to be: Boise State University, home of the blue turf. Ben has some PFGSD (post football game stress disorder) from some Fiesta Bowl when the Broncos beat his Sooners with a bunch of trick plays; nonetheless, we paid our tribute.

We roamed around the rest of the day – the history museum was closed, but the adjacent Rose Garden was lovely, we checked out the Basque block; the old (and hip yuppy) neighborhood Hyde Park where we very much enjoyed the dollar tacos at Parilla Grill. We checked out a few antique stores, picked up a few hooks, and this painting – our very first “art” for the Airstream. We just love it. 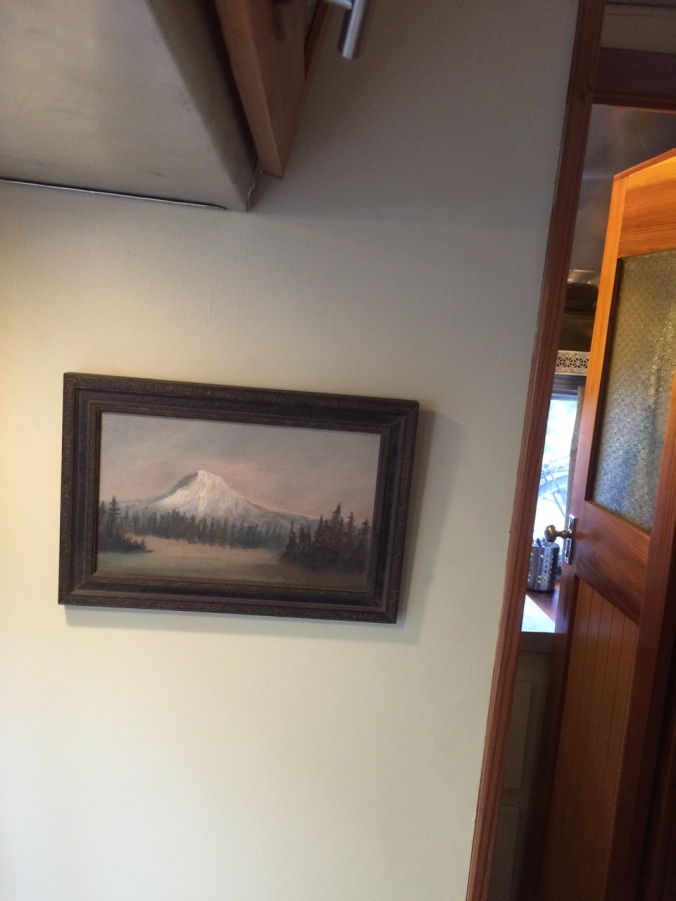 All in all, Boise was a very pleasant city – this view from the hill at Camel’s Back Park shows the inspiration for it’s name (French for “wooded”) and the beginnings of fall.

On to Stanley – a cool little mountain town in the middle of the Sawtooth Mountains. Ellen at the Visitor’s Center steered us very well: we camped on the Salmon River just as the Forest Service was starting to shut down sites for the winter. Stanley apparently gets some of the coldest low temperatures in the continental US. (More about our campsite and an awesome day trip to Lemhi Pass in the next post…) 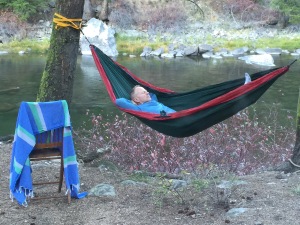 Stanley had some well stocked outdoor stores, with sales that led to the purchase of this new hammock (left). We also had a culinary highlight – the Cowboy cookie (chocolate chips, walnuts, oatmeal) at the Stanley Bakery & Cafe, though their turkey sandwiches could have used a bit more meat. We checked out the Redfish Lake Lodge – which is a whole ‘nother world – kind of rustic fancy with a beach bar and scheduled activities. Not for us, but maybe you?

Ketchum and Sun Valley are just down the road from Stanley, an hour or so. We got a spot at the 10 dollar Forest Service campsite just a few days before camp host (crazy in a good way) Cathy heads south for the winter. We biked into town and explored a bit – disappointed mostly by the fancy stores selling the same overpriced coasters. Clearly the outdoors stores are gearing up for winter season – skiing and all. It took Lonely Planet to tell me Hemingway was buried here – his writing inspired

me to become an English major. Definitely a highlight of our visit to this city. Something that left us feeling UGH was the renovation of the Sun Valley Lodge – a historic building that now looks like any other Grand Hyatt. The concierge will emphasize how many treatment rooms the spa now has, however. Utterly stripped of personality. No picture will show the injustice. Will be interesting to see the reviews once the season starts.

And finally Driggs! On the eastern edge of the state (we were headed to Wyoming) the town is the home of the Grand Teton Distillery on the Harvest Host list. The Distillery was so kind to let us park overnight in their driveway. Though we missed tasting their vodka (you know it’s made from potatoes!) and whiskey, we will look for it out on the trail. Though it was cloudy and drizzly and we had just been to the store, we saw a farmer’s market on the way out of town. “Do we have to stop?” asked Ben. AS IF! Luckily he gave two Airstream tours while I bought the last of summer’s 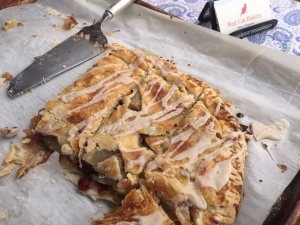 tomatoes, cucumbers, as well as jerusalem artichokes and this cherry slab pie (pictured above, though we liked her peach scone the most!) Driggs, we really liked you! The woman who grew the artichokes told me she’d give me this sticker (above right) if we put it on our Airstream. Heck, yes! They are continuing with a Teton Valley winter farmers market indoors, I heard. Hooray! Don’t forget to list and use Local Harvest in your travels to find local and lovingly grown food. For lovingly restored historic hotels, I can’t help you, but we have high hopes for our visit to Grand Tetons coming up next!

2 thoughts on “Idaho Towns Round Up”