There’s no way around it – we had to kill some time on our progress west. So we could see my cousin and her family in New Mexico, and get to California the same day a truck suspension part arrived.

We looked at a map and zeroed in on Canyon, TX, about 20 minutes south of Amarillo. It worked out great to take a few days “vacation” and SEE some sites, get to know an area with at least some level of detail. We chose Canyon after learning (Yelp and Trip Advisor are our best guides so far, along with key word searches like “cool places to see between x city and y city”) it is close to a couple of recommended state parks for hiking and is home to a great history museum. We booked an Airbnb which went above and beyond to accommodate our schedule. We pulled up Friday evening, unhitched and settled in.

Canyon is pretty happening compared to some of the other west Texas towns we rolled through on the way there. That is, if the presence of three Thai restaurants is one of the measures of happening-ness. We dined at Sayokomarn Friday night, right off town square. It was packed with families and groups of teenagers. Everyone appeared to be eating the same thing – a big pile of fried rice. The waitress explained that the teens in particular always ask for it sans vegetables. If a kid requested the vegetables, he was considered a rebel. So! The food was terrific – super fresh and spicy. We walked a bit around the square, popping into Palace Coffee Company, a cool space, conveniently across from the Vape shop. The staff there gave us some tips for our hiking and recommended we talk to a bearded fellow sitting alone sipping his coffee – he worked at the museum and ended up giving good advice about what not to miss (firearms belonging to Kit Carson and Quanah Parker that were exclusive to the museum, but for some reason were located in a place many visitors miss.  We didn’t miss).
The next day we hit the museum hard, first thing. The Panhandle-Plains Historical Museum sign out front reports that “they”

say it’s like the Smithsonian with a Texas accent. It didn’t talk, so we can’t vouch for the accent, but it was a very good museum – lots of thoughtful displays, attentive to millions of years of history, geologic, cultural etc. It helped to situate the area’s significance in American history – 1870s & 1880s – rise and fall, railroads, cattle drives, buffalo decimation. Takeaways from a graphic video showing Native American reenactors gutting a bison using tools of the day: removing the bison stomach requires brute force on the part of the Kiowa hunters; work quickly; the bladder is super useful as a water container; once you dry the skull, the horns come off easily. Later, inevitably, there was talk of petroleum, but by then we were tuckered out and still had the windmill and gun rooms to go. The old windmills are very cool, by the way.
Off to Palo Duro Canyon – said to be the second biggest canyon in these here parts (but no measuring tape large enough to prove it, I guess). The Canyon’s infrastructure was built in the 1930s by the CCC – buildings, roads, trails. As you read the history, the state was clearly lucky and grateful to get to benefit from this federal New Deal program – as the land had just come into state hands and was not quite yet eligible. They also noted that it may have been the only or one of the few CCC programs at which veterans, African Americans and young people all worked.
The main hike there is the Lighthouse Trail – about 5 or 6 miles round trip, with some challenging rock scrambles at the end to make it up to the rock figures that resemble…yes, a lighthouse. Ben was a hero and carried our backpack with our mandated gallon of (tepid and eventually warm) water per person, which we drank nearly all of and it was only May (heaven help the hikers in July and August). I had to do part of the return trip on my hands and butt. Your reward at the end is a stop at the trading post for cold Gatorade and soft serve ice cream.

After a light 3 mile hike to get to this point, the hard part’s to come on Lighthouse Trail in Palo Duro Canyon.

The next day we trekked south to Caprock Canyon State Park. Smaller in scale, though not in sites, Caprock was much less crowded, likely because it’s much further from the two nearest population centers, Amarillo to the north and Lubbock to the south. We did a good portion of the Upper Canyon Trail (too tired for the rock scramble to the Fern Cave at the end -next time!) We had the added bonus of ice cold water from bottles we had frozen the previous evening-lesson learned the hard way the day before.

Caprock is home to the bison descendants of the Goodnight herd, saved from extinction in the 1880s. But darned if those critters didn’t hide from us u

ntil just as we were leaving. We turned into the park’s lake area to dip our toes and Ben spotted about two dozen about 200 yards off. We sat and ate oranges (we’d run out of chips), watching them from a picnic bench, following the park’s rules, avoiding certain death by staying back 50 yards – see warning that doubles as your park permit (to the right.) 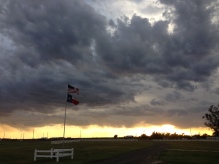 Canyon weather, coming in from the west.

On the drive home, we finally got a chance to track some weather – groups of thunderstorms seemed to be headed straight toward Canyon – just enough to scare me, but captivate Ben. They mostly broke up or went around us, but we got a good pic and eventually as we were falling asleep got some thunder.
Alas, no twister.  Ben’s enthusiasm for tornadoes has waned some since we got the Airstream, i.e. tornadoes are typically accompanied by large hail, hail dents aluminum, Airstreams are made of alumininum, etc., etc.

By the side of the road exiting Canyon – Route 66 era and full of charm.

So, an extended stay in the Texas panhandle was a risk, but well worth it. On our way out of town Monday, Big Tex Randall wished us well, and we him. So long Texas!
UPDATE: A reader reminded me that Georgia O’Keeffe lived and taught art in Canyon for a bit. Great info, including her own words on the plains, the people, teaching etc, on this from West Texas A & M University.