So it’s been a bit rainy here in the PNW. That’s my headline. Our laundry isn’t so much dirty as it is damp. But we’ve seen some cool stuff in the last week or so as we’ve hovered near Seattle knowing we’d have to return for some follow up errands.

Heading east toward Yakima and Walla Walla, we checked out the large small town of Ellensburg. It was the Friday before Halloween and businesses were handing out candy. You could get a real feel for the community spirit in this town as nearly every

business in their large district was participating. The ROTC class from the local high school served as safety patrol (and handed out candy themselves.) They have a large county historical museum where I tried to learn how to pronounce the county name-Kittitas. I also learned there the town’s name used to be spelled Ellensburgh, but in 1890 The US Board of Geographic Names made every town with a “burgh” drop the “h” (apparently Pittsburgh rebelled.)

We thought it wise to park ourselves for the evening at a winery via Harvest Host, given Washington’s excellent wine scene. We picked White Heron Cellars partially because it is a bit north of where we were headed and would allow us to see a different part of the region, and partially because it was in Quincy, WA and I have a friend named Quincy! See ho

w frivolous one can be on a year long trip? Indeed White Heron was beautifully situated on the Columbia River, though we had to take a circuitous route there. The winds were high and Cameron the proprietor said that there had been a fire previously this year adjacent to I-90 and trucks (and trailers???) just couldn’t travel safely–too many tumbleweeds. We loved all their wine and bought not one but two bottles, a red (a blend, Mariposa) and a white (Roussane). The next morning #visitorkitty got as far inside (which is to say just to the front step) of the Airstream as any kitty has thus far.

From there we headed to Walla Walla. When Ben and I got married, we had to look around for an officiant. A fortuitous serious of events led us to Rev. Jack Mathison – a World War II vet and otherwise amazing person who has remained a family friend. Jack trained as a navigator on the B-24 Liberator in Walla Walla, and we were headed there to see what we could see and share with him.

The excellent Ft. Walla Walla Museum had the goods. When we sent Jack some of these pictures, he replied saying he had spent some memorable evenings at the Marcus Whitman Hotel Café, and it’s where he started and perfected his Mark Twain yell:  “Mark .. TWAIN!”  Love him. 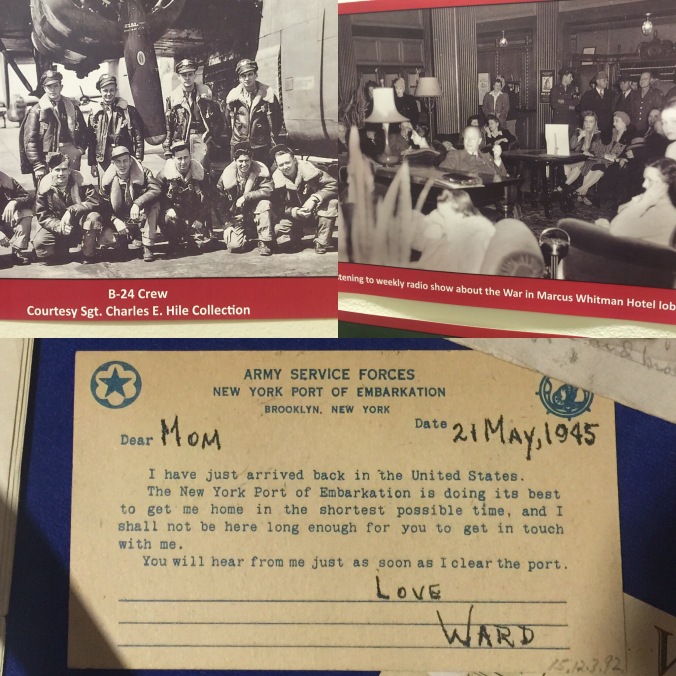 Jack told us about preprinted messages home like the one in the bottom of this pic. Easier to get past the censors! And for various reasons it took a while to get the troops home after the war ended. (For his part, Jack’s return home was delayed at least a month, as he had to spend time “fattening up” at Camp Lucky Strike in Europe following his liberation from a German POW camp, where he spent a hungry year after his B-24 was shot down.)

Walla Walla is deep into Lewis & Clark country as well. A local guidebook indicates that most of the places they camped or referenced were now hidden away under lakes and reservoirs created by the dams in the Columbia River. Oh what L & C would have done for a leisurely stroll across a lake! Of course the ensuing settlers and railroad and mining led the US government to negotiate, push, provoke, swindle and otherwise take land from the many Cascades Indian tribes, including the Walla Walla. Chief Peopeomoxmox, seen below left, actually stood up to the territorial governor and won some concessions in 1855; he secured additional lands, allowing more tribes to stay on at least some of their home lands (see the three reservations below, i.e. rather than one or two). In the scheme of things it was a small victory, but it stuck with me. 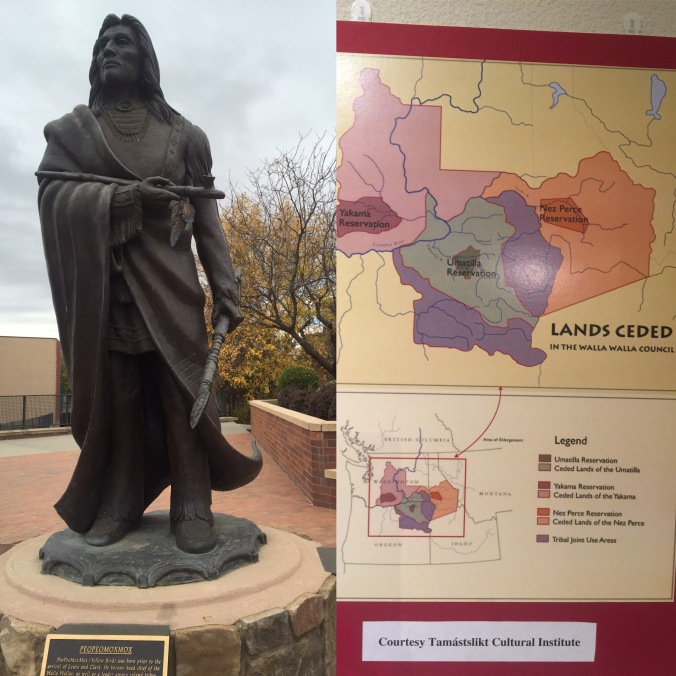 Walla Walla has become quite the wine-focused destination in the last 10-15 years. We spent Halloween evening there – in the Elks parking lot bless their hearts – and it rained. Such a bummer for the kids! We loved the scenes of Walla Walla people and culture over time depicted in “Windows on the Past” – the carefully preserved Odd Fellows Temple sandstone façade. Did you know Adam West (Batman!) grew up here?! Pop culture is important to trace as well.

After Walla Walla, we headed toward the Columbia Gorge town of The Dalles (still can’t pronounce it.) We visited the excellent Columbia Gorge Discovery Center and the folks there were kind enough to let us park and stay overnight in their lot. The area along the river there is also a trailhead for area walking/biking trails and there were lots of locals coming and going to make use of them. The staff person who oriented us to the exhibits, knowing we only had a short time, suggested we take a close look at the basket exhibit. She said of course you will see baskets at other museums, but in this exhibit she felt like she really learned and was surprised by some of their uses. (For example, upper right, those baskets were used as hats!)

Scenes inside and out of the Columbia Gorge Discovery Center

nce were up and out early – almost too early for any stores to be open. But we did see Hood River is home to one of our

And I browsed their local book store and saw this on sale – photographs taken by the excellent Molly Peterson, a good friend and former colleague of my good friend Pam. Kind of cool to see it out here in the wild! Any food picture taking tips I have learned from Pam, Pam has learned from Molly, so thank you Molly! And with that, I will leave you with a potato encrusted red snapper, which I believe I made in the enchanted forest adjacent to Mt. Rainier last week. Pam’s tip to me (and I assume Molly’s to her) is to zoom in, give your picture a focus, which I did below for the picture on the right.

To test my theory, I asked Grier, who is sitting next to me, which of the pics was more interesting/engaging and she said the right one BUT she noted she is not sure she can tell what the food itself is (eg fish, potato, etc). Goo

d feedback for next time!!! 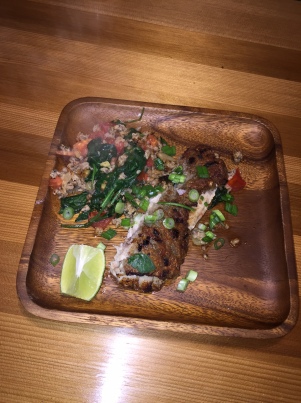 2 thoughts on “Wandering Around Washington State”