NOTE: any errors/typos due to bad wifi! NOT human error. 😉

Places like the John Day Fossil Beds National Monument are the epitome of what we love about this trip. First, we discovered it by accident. We would have taken a more direct route to Idaho if not for crop duster Chris, who stopped by for a long chat both days we stayed via Harvest Host at the Erickson Aircraft Museum in Madras, OR. (Fabulous collection, wonderful hosts.)

On hearing we were headed to Idaho, Chris recommended we take the more scenic 26 east, even though it was a bit longer, it is, more…scenic! Plus we could see the fossil beds, and end up in Baker City, for the Oregon Trail National Interpretive Center (upcoming post). A little science, a little American history – a no brainer.

The roads to the Fossil Beds were windy, lonley, and without cell service, though we were now a bit wiser about gassing up in advance of any crisis. Many of the mountains are the results of volcanic action. Colors and bands and texture, crags, and loops and juts and – because lava swiftly, suddenly, and amply pored is such a good preservative: Fossils! 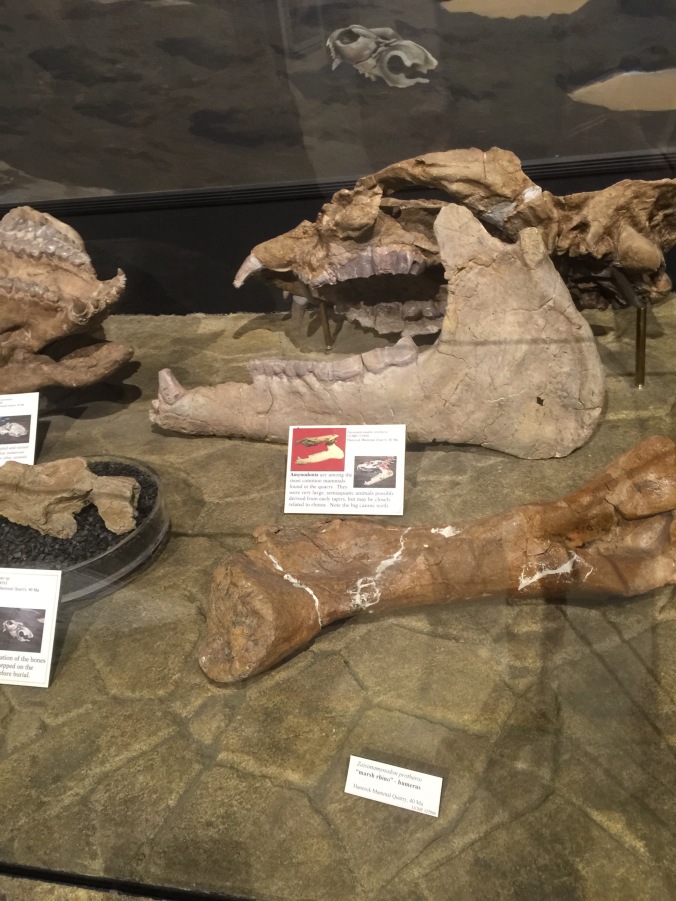 The fossil beds were “discovered” in the 1860s because of a confluence of historical, scientific, religious, economic, militaristic, etc events all coming together so it makes so much sense in retrospect and helps me put together the pieces of history. In the 1860s, Civil War troops, miners, teamsters, roaming about in the hills brought fossils back to Thomas Condon, a frontier minister who was also a geologist. This was in the midst of Darwin’s theories being debated in the public. Condon’s writings on the discoveries caught the attention of geologists at Yale (!), Princeton (!) and Berkeley (!). These gentlemen fought a bit about what was what, what it meant. They collected and brought back more treasure to their labs and private collections. (From what we gather fossil and artifact collecting wasn’t outlawed until the 1970s). Though the sites are remote, they are special and worth a visit: Lots of superlatives like the biggest collection of types of fossils found together – plants and animals to tell a complete story of a place over massive time periods.

Ben and I did our layperson’s tours of the three sites over two days (they are about 100 miles apart). Visiting the beds is like taking several short hikes, where interpretive signs thoughtfully point out fossils still embedded in the rock in Clarno, and the science behind the brilliant colors of Painted Hills. 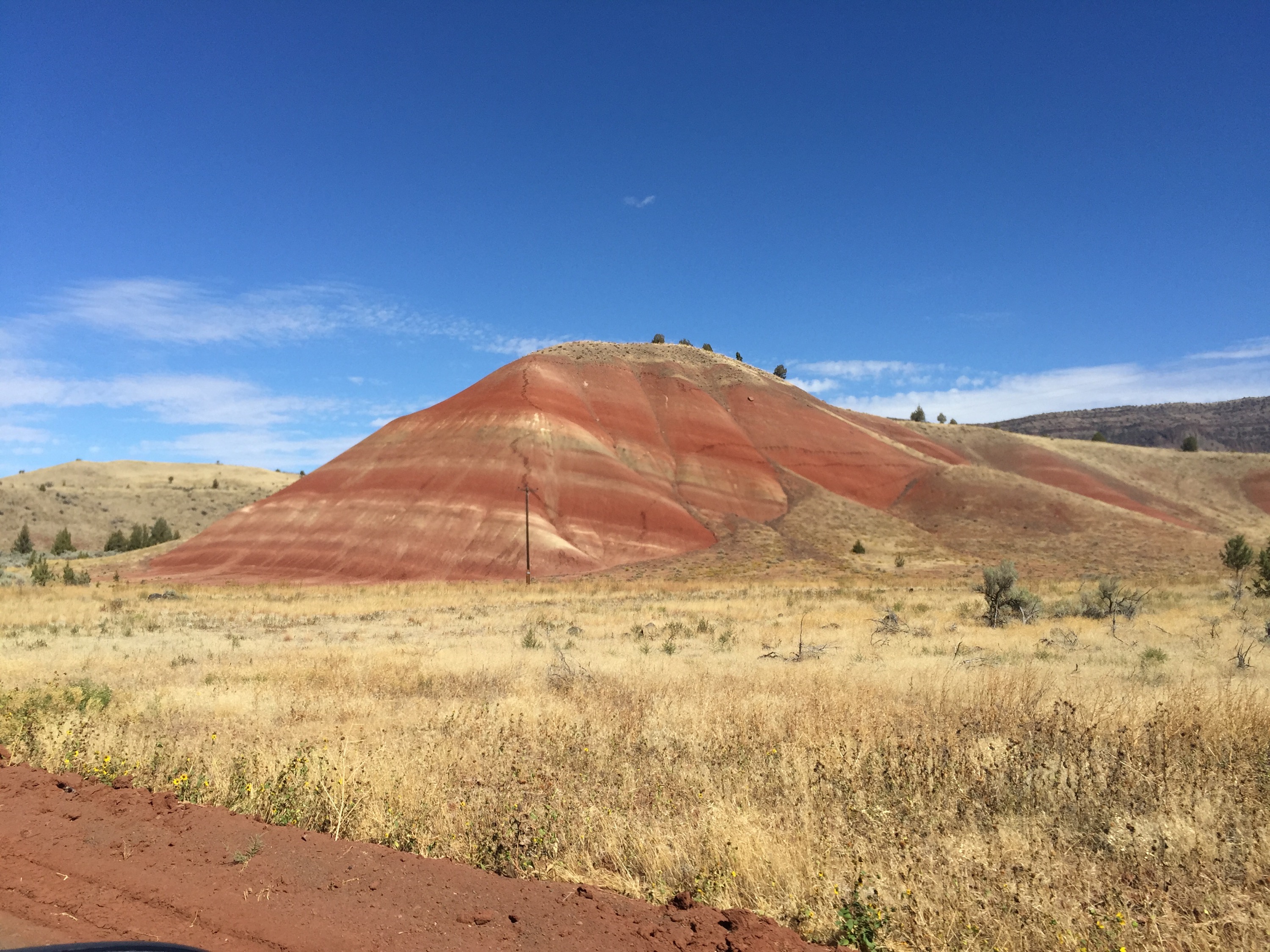 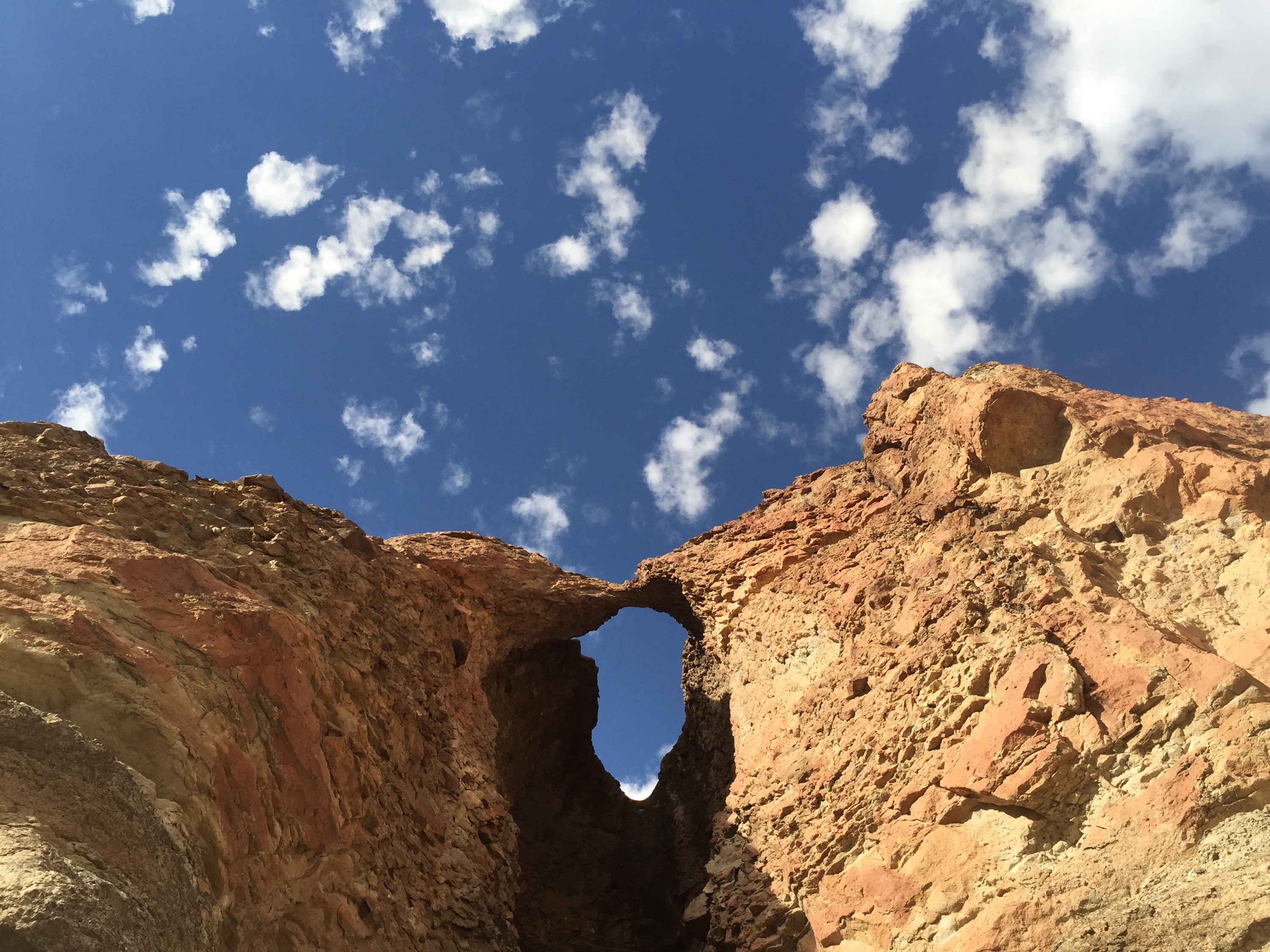 At Clarno, the aftermath of a volcano 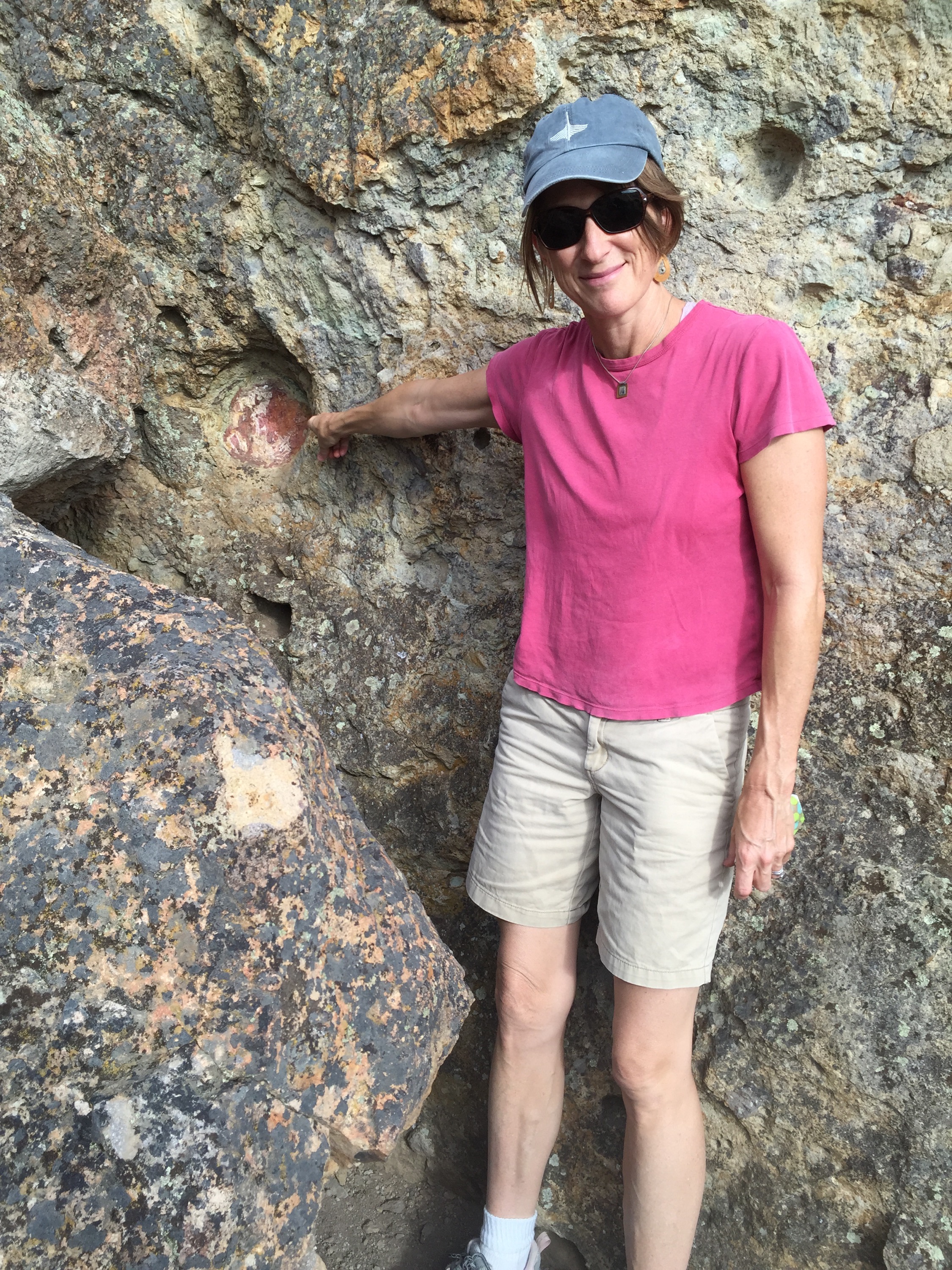 At Clarno, me helpfully pointing out a fossil (tree wood)

As I said, we did the three sites in two days – first some lovely hikes in the Painted Hills unit, then 2+ hours up the road to Clarno. We dropped the trailer off on the way at a primitive but awesome BLM campsite, Muleshoe, on the John Day River: five dollars a night, no hook ups, but solar going great and a little water conservation gets us far. We used the grill for the first time – steak of course. (Use the excellent map to plan your route and find campgrounds and other services.) 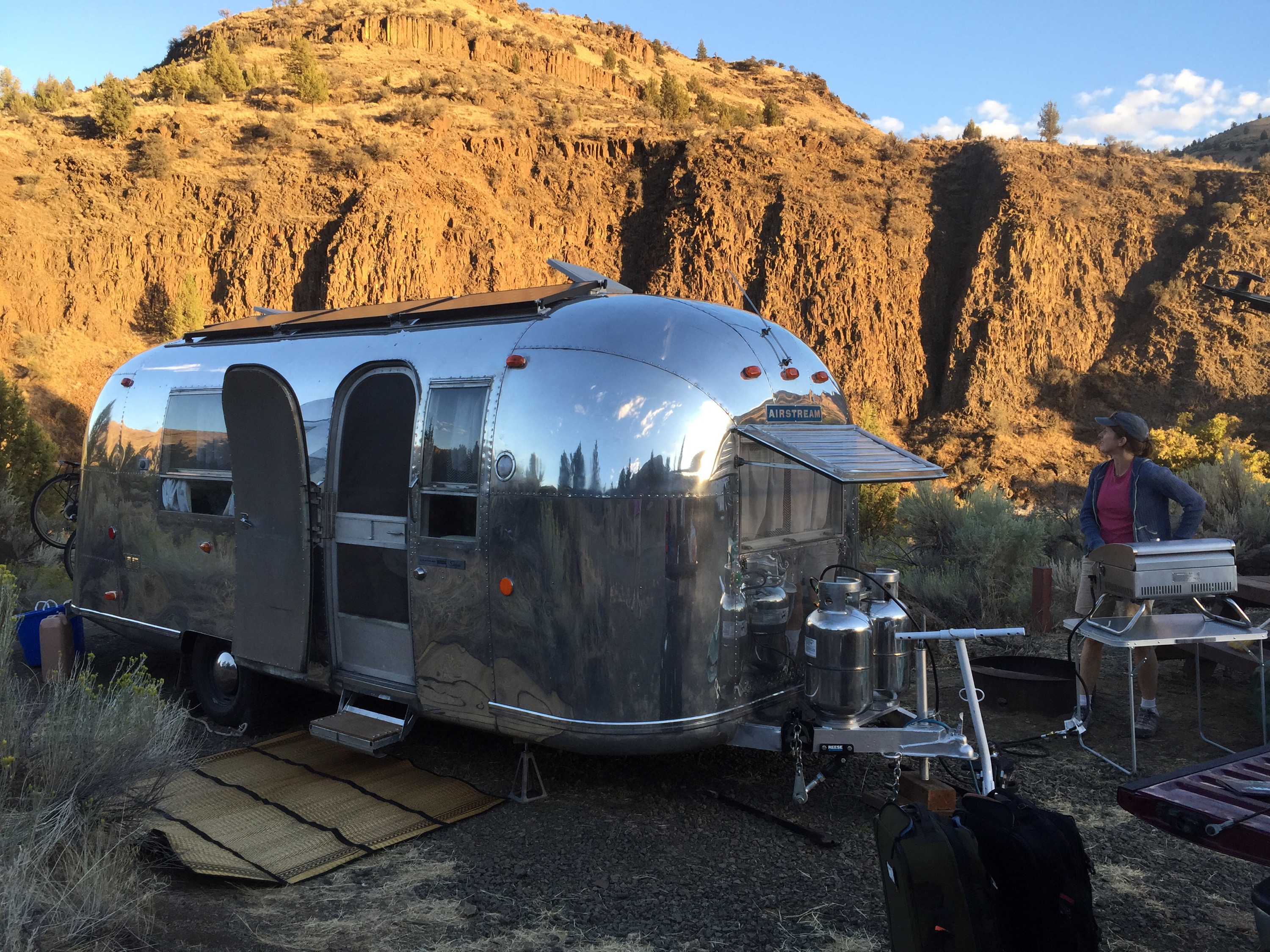 Our campsite, Muleshoe on the john Day River

The second day, we checked out the museum — Thomas Condon Paleontology Center- at the third site, Sheep Rock. Amidst the excellent displays explaining what all the fossils tell us, we just shook our heads in amazmenet at the work geologists, paleontologists and their colleagues do: figure all this stuff out from a rock.

Then we headed across the street and millions of years to the 20th century and the Cant Ranch Historic Home  (Scottish immigrants – made buckets of money like others in the area on sheep in time for WWI when all the soldiers needed those comfy wool uniforms!), which has been preserved and maintained by the NPS to show what ranch life was like. 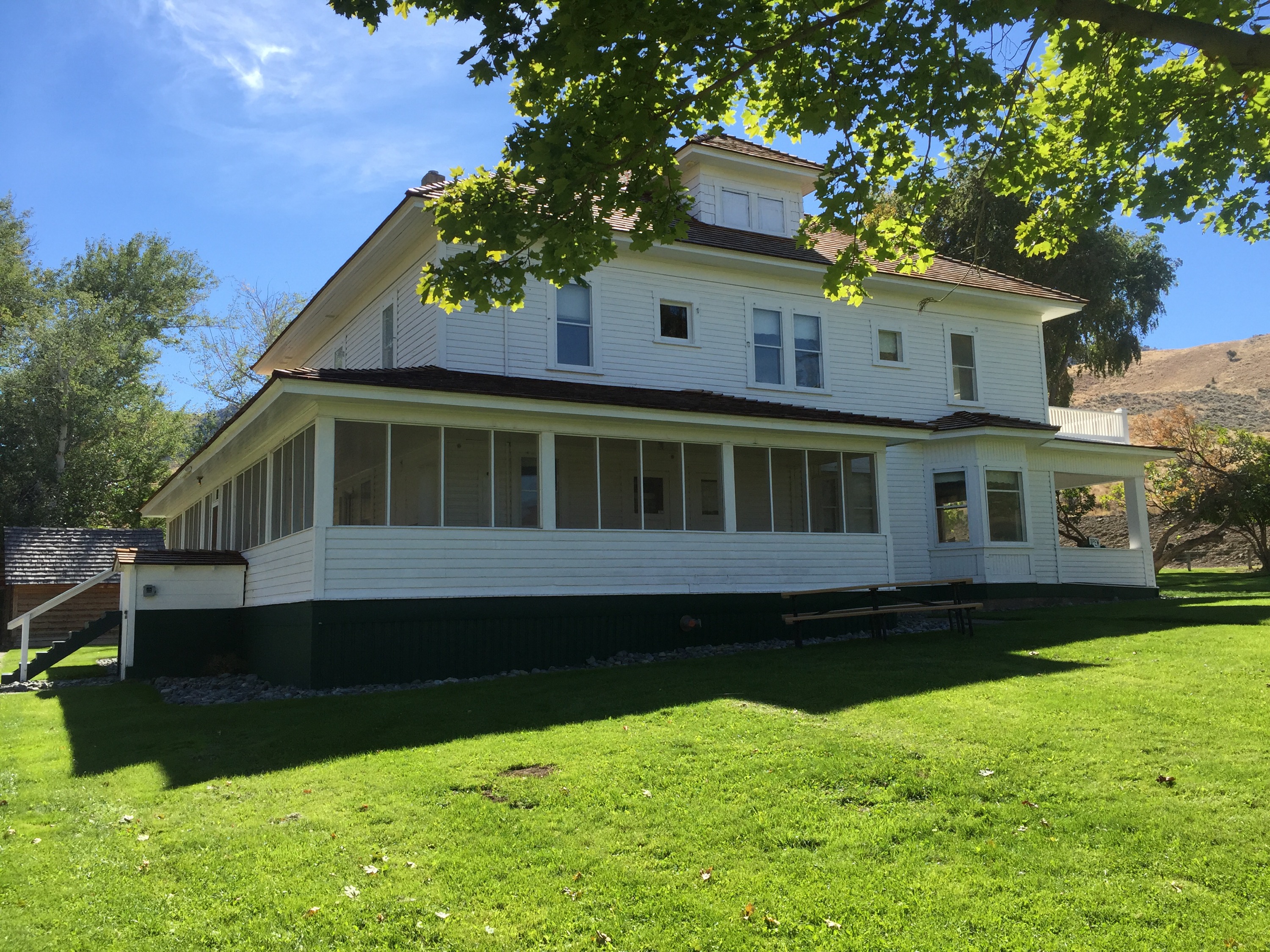 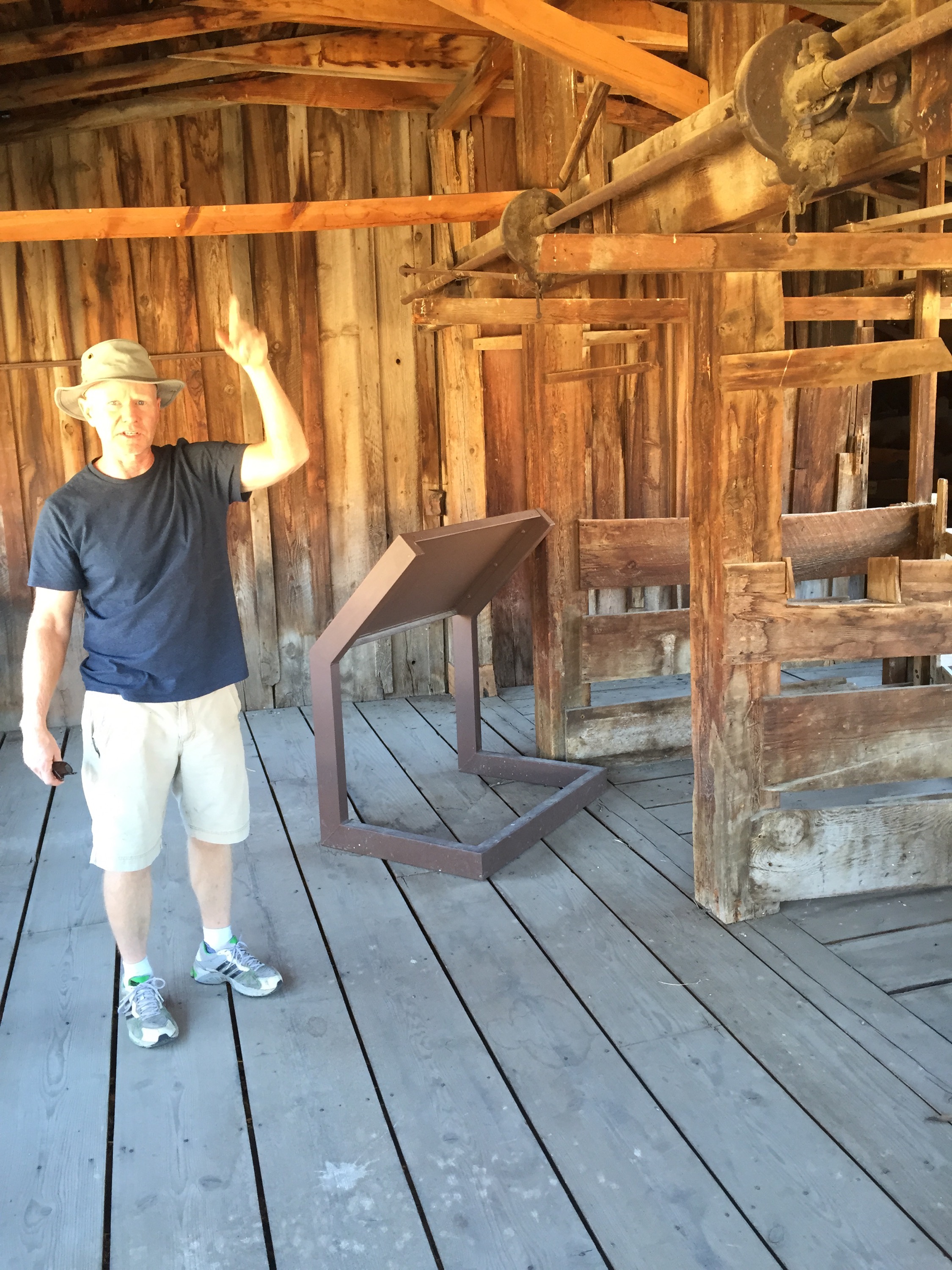 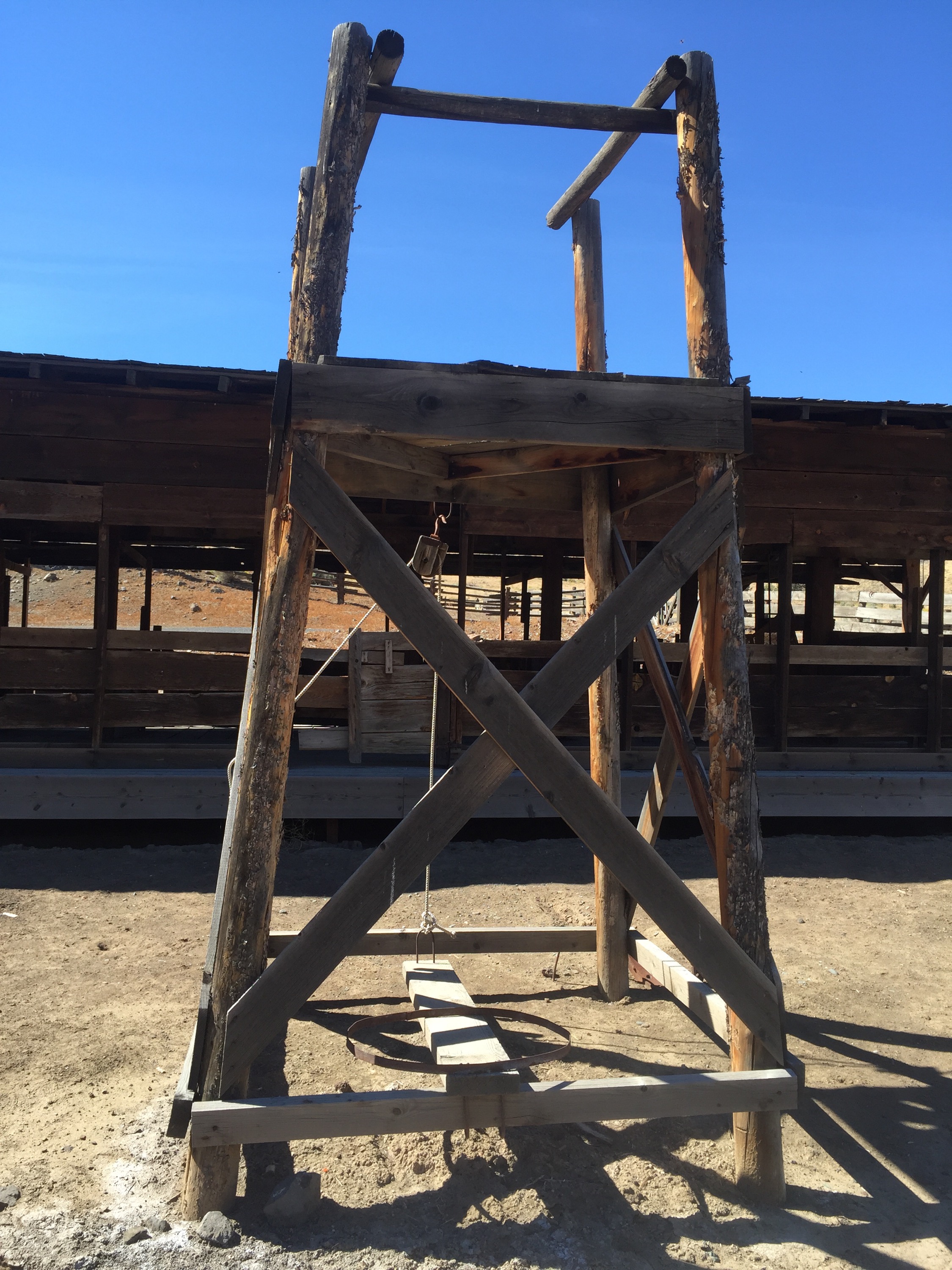 Like a giant basketball hoop/net to hold the wool. A kid would jump in it to smash it down.

The Cants were successful ranchers and convivial hosts. The kilt wearing youth after partied at the ranch after “skip to my lou” dance parties in the community. This is of course where we get into women’s contributions and I know I would have liked Elizabeth Cant who, reflecting on her life as a rancher’s wife and hostess, rued that when she died, she’d be greeted at St. Peter’s gate holding a dish towel.

We peppered one friendly park staff member with our lingering questions, drilling down on the basic “What is a fossil?” to make sure we really understood.  I guess I had always assumed it was or at least partly original organic material – the mammal, the leaf, the seed. Otherwise, honestly why get so excited about it? But, it turns out it’s traditionally very, very rare that fossils would contain / include any original organic material. They are indeed, like shadows, ghosts.

“Life is very fragile,” the staffer said, referring to science with more than a hint of philosophy. 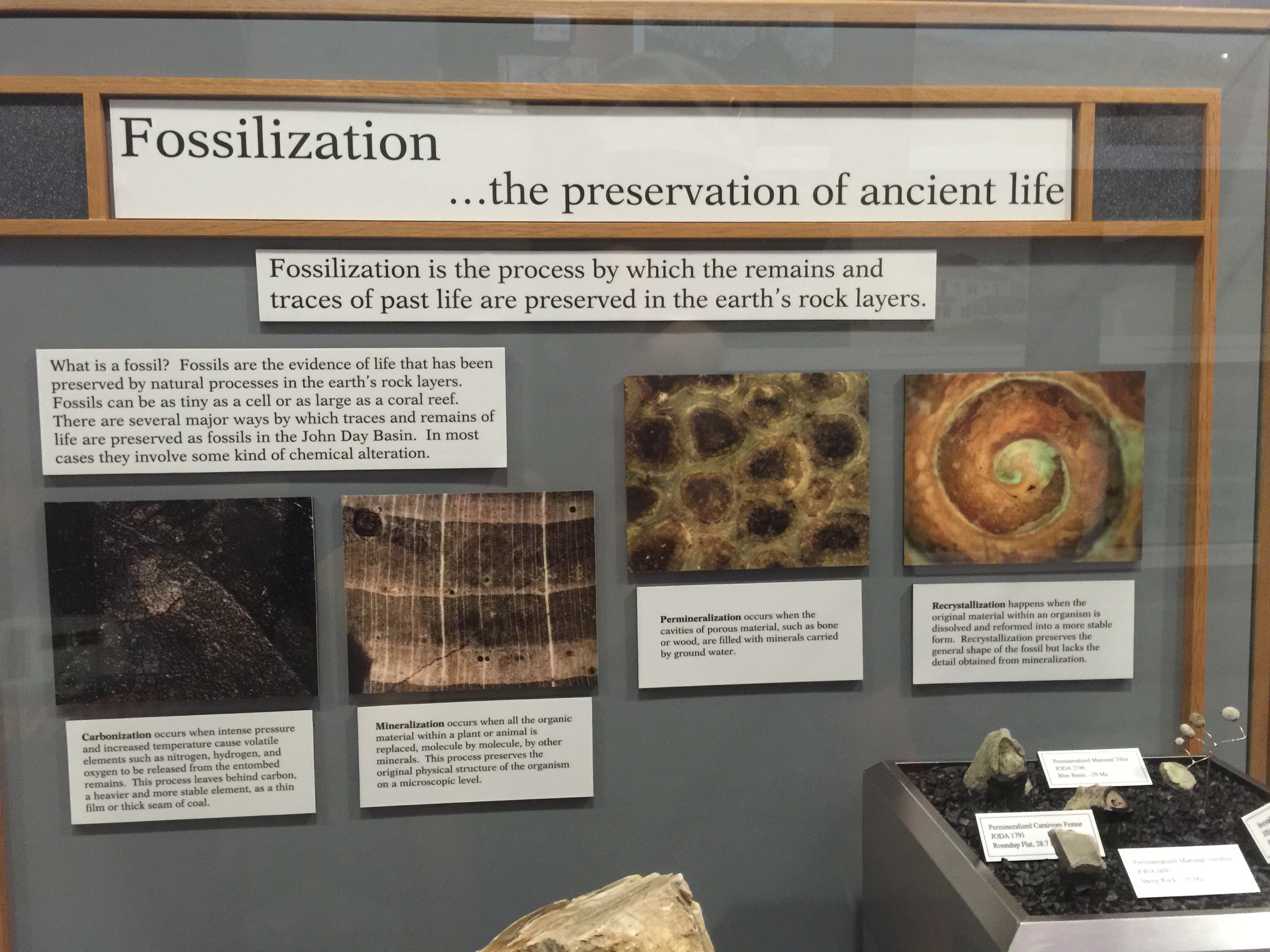 little did I know there was actually a display answering my question. oh well, i like the human touch.

And that made fossils even cooler. It’s impossible to have LIFE from 30 million years ago, so we more than make do with fossils. Can’t complain about that.

6 thoughts on “Life is fragile – Lesson from a Fossil”