The LA sun has been relentless and hot – but the sheen coming off our sunscreen and sweat-slathered bodies is no match for the shiny Safari! Last week we worked with Colin of CFDetailing for three days to polish her up. Read more about the brutal work involved in our last post. Or, just enjoy the results in the slide show below…

The only glamour shot I haven’t gotten yet is one from the roof of our garage. We used to scramble up there all the time as kids, but I took a long look at the three feet I’d be required to hoist myself up from the top of our neighbor’s wall to the roof and decided I was too old.

-We took a day off and went to Ventura – a cool town on the water between LA and Santa Barbara to hear our brother in law play music at a festival there. (Could this, will this, become a travel blog some day soon???) 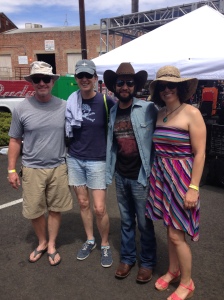 Ventura is home to San Buenaventura, one of the nine California missions founded by Junipero Serra. If you went to grade school in California, even public school, you were assigned to read and write about about Serra, re-enact his life, and build your own mission model to scale (my brother’s is still in a cupboard in the den.) Ben laughed when I told him this, saying his memory of Texas history in grade school was lessons of Jim Bowie, Sam Houston, etc. and none of Mexican/Spanish heroes.

The Pacific Ocean in Ventura, CA. To the left, right and behind this picture are dozens of people (many with RVs) enjoying an afternoon at the beach!

We took a long walk along the state park beaches just north of Ventura – lots of trailers, RVs, and even two Airstreams were parked along the beach. It seems there is an overnight section as well as one for day use only.  It was so nice to see people actually USING their trailers – not just restoring them! We saw every type of person engaged in every variation of (mostly wholesome, family friendly) beach activities – football, fetch with dogs, eating chips, taking selfies, body surfing, surfin g, boogie boarding, hole digging. Unfortunately, the only picture we got was this one of the ocean. Just picture it all!

-I started making the cushions for the Airstream. We selected a subtly striped fabric – sort of Aqua/turquoise/seaglass color? I’m starting with the cushions for the napping couch which has two cushions, one of which will never be seen. That’s the one I’m starting with a test cushion. In order to get the foam a custom size and with the sought after 5,000 restful naps guarantee, I went to Foam Mart, the town next door in Burbank. I was grateful there was a local place I could go to get exactly what I need, plus some tips (eg you want to cut the foam just a bit bigger than the space it’s going in – in my case 3/4 inch.) Here is a pic of a “dry fit” of the first cushion – you can see I’m using a contrasting piping to bring in the navy blue of the curtains. I don’t think we’ll do that in the dinette, but we’ll see. (In the background of this pic, you can see our flooring boxes which arrived semi-safely via Greyhound from Maryland!)

Mock up of cushions for napping couch. Same green fabric will be used in dinette, but likely with matching piping. 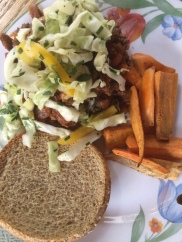 -Last, for now, food. Shout out to a good meal at the Cracking Crab in Montrose. I haven’t seen this trend hit the DC area, 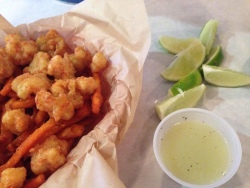 but apparently seafood boil restaurants are all the rage here. At the get go, the server laid down the lime juice dipping “sauce” and it was awesome with our mussels, shrimp and popcorn lobster, pictured left. Totally new (to me) and better than lemon. Try it!

We’ve had some amazing meals at home as well thanks to California farmers and farmers markets. For example, cabbage. Would I ever buy it in the supermarket? No, but at the farmers market, it was irresistible. So we had sloppy joes (a childhood favorite) with coleslaw, pictured above, right.

What’s next? While I embark on the cushions, Ben is finishing up the redwood shower – see also previous post and our many, many Instagram pics on this project. We also did a rough sketch of the dinette/bed (so I could start the cushions) and Ben will begin building that next week. 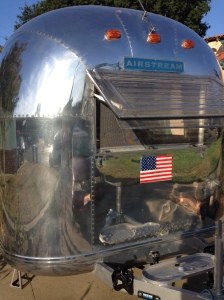