Hello from sunny California! It’s been a happy whirlwind – from the safe end of our journey to LA, through the “prep” for the (third and final stage of the) Airstream’s restoration. Coming entries will be of greater interest to shop, design, and grease geeks. But, to recap:

Wednesday, 5/6
After Albuquerque, we hightailed it through the rest of NM (through a couple of scary thunderstorms), and across the Mojave desert. Ben put in a 12 hour plus drive day, again, thankfully with no problems. We bunked down just outside of Orange, got up bright and early to make one last pit stop: Brad’s Valero in Orange. The situation was this – towing the Airstream, the rear end of the truck was riding too low. For the mechanically minded, Ben had installed a Roadmaster Active Suspension, essentially a device that helps out old tired suspensions, and provides other benefits – anti-sway, increased traction, etc. The Roadmaster had helped, but on the trip out to Calif – fully loaded truck and Airstream – the truck’s rear end was still sagging too much. We called our Roadmaster rep Ryan in North Carolina and he took charge –  he arranged for us to trade in our Roadmaster for the newly released heavy duty model, and he hooked us up with Brad, his star Roadmaster installer in California.  Awesome customer service all around – Ryan took our situation very seriously and was determined to make his product work for us.  Brad owns a very very busy service station where every staff member was all about customer service. Brad, like everyone in California, seems to have just hopped off a surfboard, or at least still grooving the good vibes from his last wave. Super efficient, friendly, quality-focused.  We’ll be back for a truck tune up before we leave. And the truck is great with its new heavy duty Roadmaster system!

We completed the last leg of our journey–from “the 5” to “the 605” to “the 210”, because you don’t want to go throughdowntown LA then or really anytime of day. (The SNL skit does not exaggerate.) Official arrival time on a quiet curb across from my parents’ house in Glendale: 11:30am. Departed North Beach, MD at 10:17am 9 days earlier. Anyone want to do the math? Nevermind, who are we kidding? Google’s got it: 42 hours of driving time, that’s 2,793 miles! 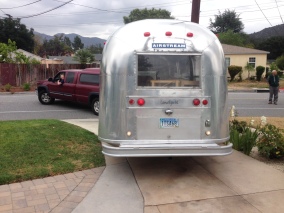 Dad (right) and brother Johnny helped direct us in.

My folks were more excited to see us than the Airstream, but made a valiant effort pretending! After a quick breather, Ben pulled away from the quiet curb and backed into the driveway – the presence of a telephone pole made us imagine this scenario ending badly. But he did awesome – we didn’t even need to block traffic. A little

scraping and groaning (from the Airstream) and we were safely in and positioned well for the duration. I thought I might kiss the ground when we got here. I didn’t, but the look on my face in this photo taken immediately after I think (I hope) exudes gratitude to all who got us here safely, or ma de appeals to that end.

Thursday 5/7
After unloading the truck (mostly our personal stuff + 4 sawhorses!), we began our work prepping the garage for the Airstream restoration. My parents’ garage is the perfect blank slate for such work, but blank it was so we set out for a marathon trip to Home Depot. You know the type. Spouses separated for upwards of an hour. In our case, me with my heels kicked up in the patio furniture displays, and Ben wielding 2X4s, 4X4s and plywood sheet onto a giant cart. Wood for shelves. We are also working on a couple of projects for my parents which we’ll squeeze in.

Somewhere in there I went grocery shopping – I am excited to cook during my time here in ways that will help prepare me for Airstream cooking: keeping in mind budget, space, minimal tools, but NOT ingredients, because for gosh sake it’s spring time in California and fresh fruits and vegetables will be had.

The perfect blank slate shop garage, after we cleared a few things out.

Friday 5/8
Build garage shelves! From zero (everything is on the floor of my parents’ garage) to fully functioning within five or so hours. In sorting out the stuff in the garage we made three piles – save, pitch and

freecycle or garage sale. We pretty soon realized there was really nothing for the latter category. I don’t know what it says about my parents, but they have nothing anybody else would want. Unless you count the Nixon AND Kennedy pins I found in the way old box. or my Uncle Ron’s slide rule. We spend some time looking at my dad’s Air National Guard action photos, and teasing my younger brother (in Boston) that we accidentally threw out his Star Wars action figures. When 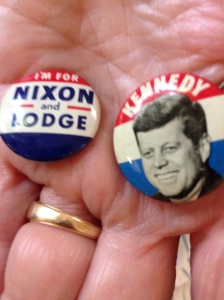 One for mom and one for dad! Perfect couple!

putting stuff ON the shelves, we stacked and roped off with earthquake safety in mind, and shelf-ishly kept some clear for the stuff for the Airstream project. Again, we’ll configure all when we depart.

Back to Home Depot for materials to build a beefy rolling work bench. It was fun and easy to build – casters rock! It’s perfectly suited to the job, but alas it’s next life will be as a lowly laundry table. Ben added some handles to the garage doors, and other odds and ends to make everything flow easier.

Ben and I b

egan the morning with the first of what I’m sure will be weekly treks to the Montrose Farmer’s Market. We walked the two miles or so up to Montrose with an empty backpack, stuffed the backpack (and another bag) and called Mom begging for a ride home. No dice. After resting up and fortifying ourselves with macaroons, we trekked home. Highlights: berries, berries, berries, nectarines, gorgeous avocados, rainbow chard, golden beets, dates, walnuts, a knife sharpening stand where Ben got his pocket knife tuned up, an awesome dixieland band (cornet player had a vintage cool stand-mounted mute, the likes of which Ben, a former player, had never seen).

In the afternoon, we emptied the trailer – two piles – stuff for the project, and other stuff, which could roughly be divided into three piles: 1. fun stuff (bike helmets, kayak, metal detector), 2. necessary for living stuff (sub sub divided, kitchen, office, sleeping, and 3. the why the heck did we bring this??? I was pleasantly surprised that the latter pile was smaller than I thought. Still doesn’t make up for how many clothes I brought.

We have so many tools and materials for the project that we have to keep some stuff outside (see pic above). For example the cabinetry is carefully draped in a tarp, and though we feel certain the 0% rain chance will hold, around here you gotta

Work table on casters in the distance, new shelves on the left. Patriotism on display throughout!

plan for earthquakes too. This while a tropical depression is threatening our Maryland house. And tornadoes and storms wreaking havoc in TX, OK and AR.

Mother’s Day dinner (much from the farmer’s market): Goat cheese and walnut stuffed dates, Italian white bean and chard soup. Aunt Margaret came over – an intrepid traveller herself, she asked excellent questions about our planned trip and the Airstream during her moonlight tour.

Monday, 5/11
Day began with – wait for it – a trip to the hardware store.  Had to get a can of Bondo, which is a fiberglass putty filler typically used for repairing body damage on a car.  For our project, we needed it to fill in various holes and depressions in our new Nyloboard subfloor prior to putting in cabinetry.  Process:  scrub subfloor with SImple Green, damp mop, wipe down, let dry, apply Bondo (the unique smell of Bondo, according to Ben, hasn’t changed since 1978, when he practically re-created the body of his rust bucket

Triumph TR-6 with the stuff.  Ah, memories …).  Anyway, for those who have never used Bondo, you scoop out a hefty dollop onto a plastic plate, squeeze on a “ribbon” of hardener paste, mix quickly, then apply even more quickly.  You don’t have much time with this goop

before it starts solidifying.  So, holes got filled, seams got evened out, floor got sanded and damp mopped (again) and that was that. But the workday was about over by then and it was time to break into the newly acquired 30 pack of Miller 64 low-cal beers, which tasted pretty delicious on a GORGEOUS California afternoon.

Dinner was Mom’s treat at Dish Restaurant (she was flush with her Mother’s Day gift card).  Dad had a church meeting, but my sister Sara and her husband Dave joined us for half price hamburger/beer night.  Free spirit Ben rebelled by ordering a salad and wine. While we’re in California, we will definitely go see Dave and his band (Just Dave Band) perform – Dave recently played harmonica (for the 2nd time!) on American Idol, most recently as a part of Boy George’s Karma Chameleon. Both performances got him serious camera time!

Tomorrow – Unlike California lawns, the Airstream starts growing again. Please consider adding a comment / question / feedback to this post! Or point out the typos, or offer a suggestion on how to fix all the goofy wordpress spacing/formatting! PS We delayed watching Mad Men to get ‘er done!

4 thoughts on “Getting Ready, Set…”