Rangering is only 8:30 – 5, five days a week. So we had 17 sets of “weekends” (my days off were Thursday/Friday) over the course of our summer in Vermont. We didn’t go away for all of them,but most involved at least a day trip, and sometimes an overnight. Here’s a map and a rundown of what we did for the first four! 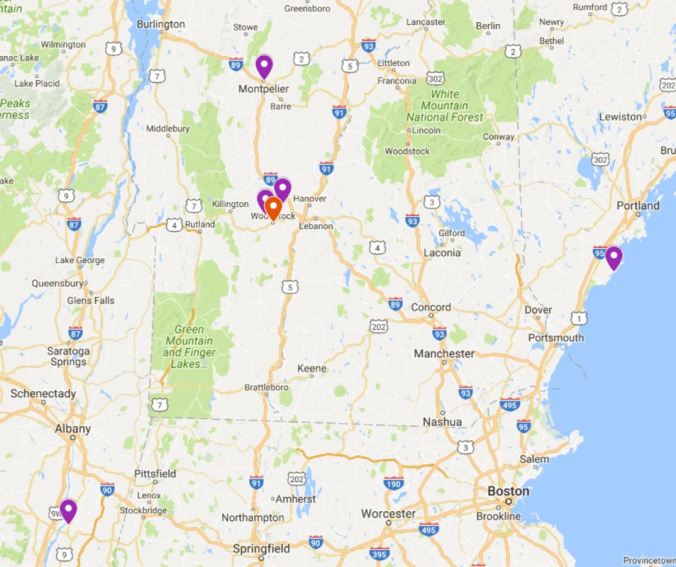 First – Montpelier! The state capitol. Isn’t it lovely? So stunning and yet so Vermont. The previous state house burned down in 1857 and they went to work on this replacement right away. Some of the original locally quarried granite is still there!

There was a storm moving in while we were there – a bit of an anomaly as it turned out because it was a very dry summer in Vermont. 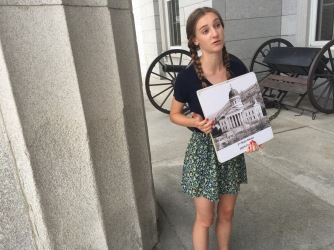 We had a fabulous YOUNG tour guide who walked us through the beautiful building, pointing out this and that. When we toured the hall with govenors’ portraits, she did NOT have to tell me who the fellow (below) on the left was. We ate dinner at a fairly forgettable establishment, but did find Vermont’s famous because it’s hard-to-find-so therefore-famous beer, Heady Topper.

The following weekend we had a date with Reverend Jack, the Presbyterian minister and WW2 vet/POW who united us in marriage lo this 13 years ago. He goes to Maine every summer to spend a few weeks in Goose Rocks Beach near Kennebunkport, where he was “stationed” at a church for many years, and where he raised his family. We drank martinis, strolled the beach, stalked the Bush family compound, and ate lobstah at Nunans. This weekend will also be remembered for the birth of our nephew Cash – a wee bit early, but all the more exciting! 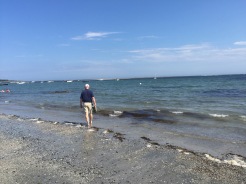 The next weekend Ben was off on an adventure on his own, so I ventured out on my bike a few miles up the road to hike some of the Appalachian Trail. The AT is a big part of the community here – many locals are “trail angels” bringing food, drink and supplies to spots on the trail for thru-hikers to take as they need. You occasionally see hikers in town, looking for wifi or a laundromat, or a shower. 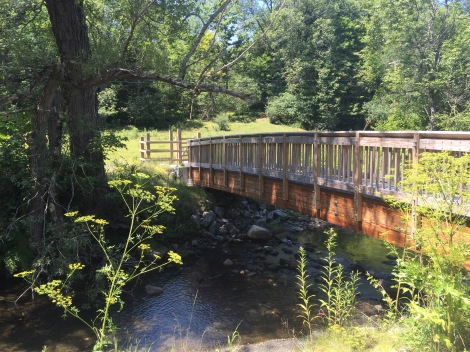 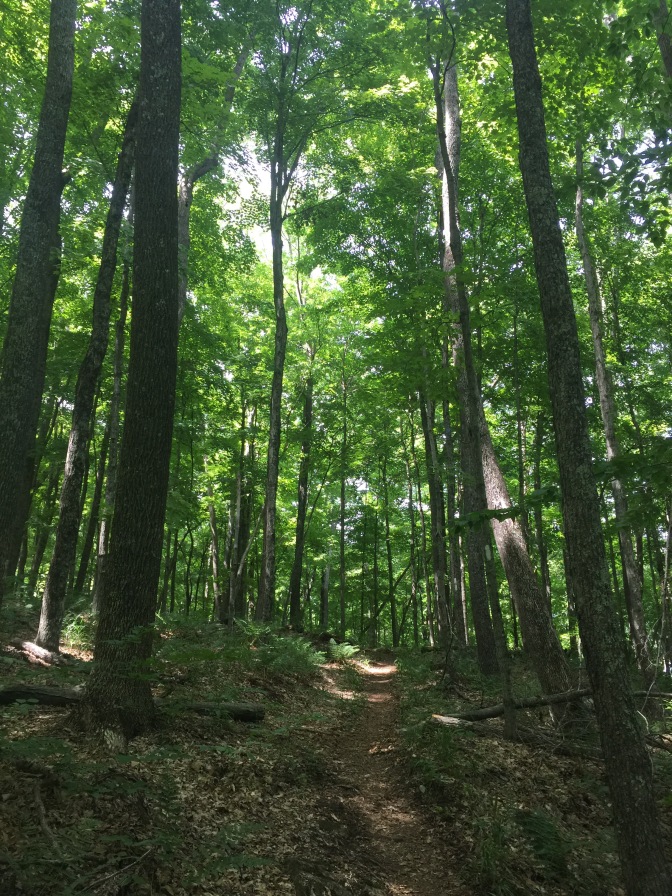 I really loved my bike-hike combination. I saw/smelled some hikers going south, some going north (nobo or sobo in the parlance). Many of them wisely took a short detour off the trail to get some pie at On the Edge Farm. This little visual treat was along the route for me.

Finally, we did a big trip to New York’s Hudson River Valley – the mansion I give tours in as a ranger is filled with American landscape art. On a tour my first week, I had accidentally identified a Thomas Cole as a Thomas Moran. One of the visitors corrected me via a very polite note left at the visitor center. Ugh. It was time to get smart. Below, the view of the Catskills from Thomas Cole’s house in Hudson, NY. The Hudson River is between here and there. Isn’t it stunning? 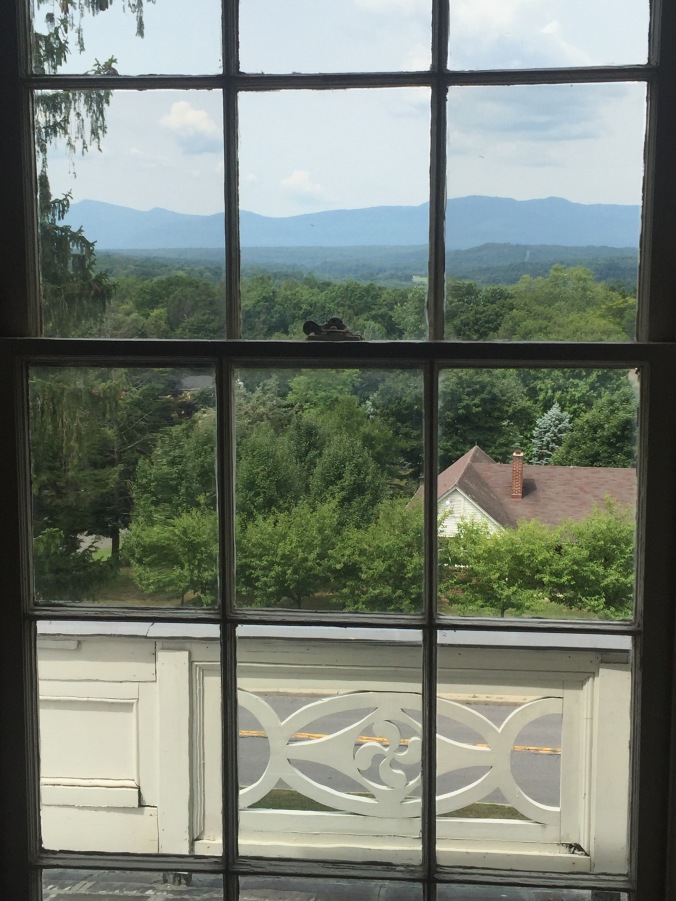 For those of you as ill-informed as I used to be, Thomas Cole was THE founder of the Hudson River School of artists. Not a school you go to. More like a group of people with a similar approach – elevating American art in the days when there was no such thing, with a focus on our landscapes. The house had some original furnishings, but really showcased his work habits, routines, and approach as an artist – for example look (below, left) at his notebook showing the different colors for tree bark, and (below, right) his studio. Cole died fairly suddenly, and young-ish in 1848. Respiratory ailment – all that work in studios with stoked fires, handmade paints, and toxic fumes. 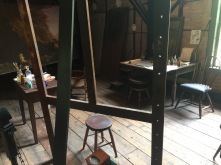 We swung west, just about 20 miles toward those Catskill mountains for a short hike to Kaaterskill Falls – a fairly small, but lovely waterfall that just knocked the socks off those artists once they could steamboat their way out of New York City in the 1820s. 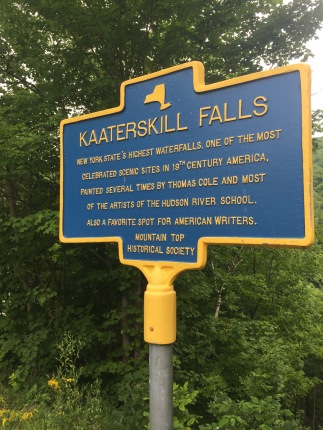 One of Thomas Cole’s students, Frederic Church, was born to wealth, but became an accomplished artist in his own right. Both are showcased at his home just a few miles away: Olana. Such a beautiful house, more opulant, inspired by Church’s visits to the near east. 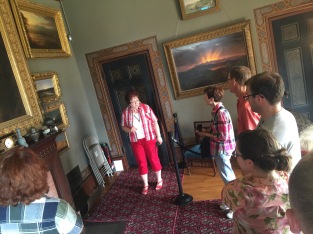 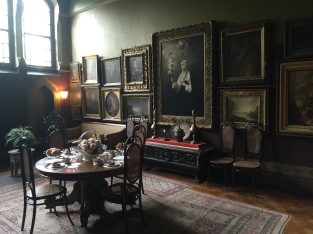 After Cole died, Church helped his estate (cash strapped family) by selling Cole’s paintings. We have three Coles in the mansion, plus the correspondence between Church and the Billings family, negotiating the sale (this was before the days of art dealers.) And now I am proud to say I can tell a Cole from a Moran.

One proud couple spoke their truth this same weekend, the weekend of the DNC. And, because the moment involved a pocket constitution, I screen grabbed it. I just found it among the Hudson River Valley photos on my phone. So, I will leave you with one more timely work of art. 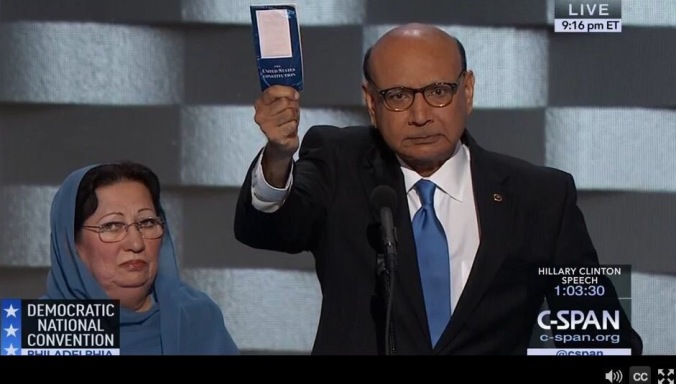 Yesterday in Plattsburgh, NY, we picked up the Airstream at Colin Hyde Trailer Restoration, where it spent a pleasant winter and early spring (though it’s still winter in Plattsburgh, brr). Colin has expanded his shop – it’s huge – there were at least 15 trailers inside, as many outside, and a newly acquired forklift. We spent about 3 1/2 hours there, reviewing all that had been done, admiring the work, chatting with and watching the crew.

Sam (at left in the pic, looking up full-timing websites for us), who works in the shop, but lives in his Airstream and has travelled the country, gave us a few tips, philosophical and practical for life on the road: if you don’t like the guy next to you, you can leave; if your trailer is polished, it might look nice, but you won’t meet as many people–they’ll be too intimidated to approach. Also: picking up some part time work is a great way to get out of tourist mode; it’s impossible to hate any job you’re gonna have for only two weeks. The RV world may seem weird from the outside, but once you are in it, it’s normal.

We made it home by 11:30pm, safe and sound, after a delicious lunch in Lewis, NY at the Lewis Family Cafe which is a part of the Betty Beaver truck stop. Our waitress told us Betty was an early pioneer for women in the trucking industry. Don’t know about the beaver.

Driving through NY was a bit harrowing, though the horn was honked once, in Paramus, NJ. Thanks to the gang behind the Serial podcasts for making the time go by quickly.

We drove from Maryland to Plattsburgh today – a drive roughly 1/2 of which is through the boring old Northeast corridor, and the other 1/2 through lovely Hudson River Valley, Catskills, and Adirondacks. We wanted to stop along the Hudson River for lunch, and chose Newburgh because it was an easy turn off and hosts a cool historic site – Washington’s Continental Army Headquarters from 1782-83. We stumbled upon Tony’s Newburgh Lunch and had hit-the-spot grilled sandwiches. The waitress, who was s

o nice, recommended a side of hot dogs, but we passed. She said the diner, in a different location and under the name Texas Weiners, was started by Tony’s father in the 1930’s. A survivor.

Speaking of which, tip of the hat to Ben who has done this very drive now 3x in the past few months, twice on his own. This leg, he once again drove each one of the 540 miles himself, and I sat in the passenger seat trying not to create trouble. Airstream reunion tomorrow!