Despite getting our first noise complaint from a neighbor (and so agreeing to limit the use of all saws to between the hours of 930am and 4pm, Sundays off), we’ve made major headway on our respective projects. Ben is well into the dinette/bed project which started as the sketch below. Getting the measurements to fit within the space but also the norms for sitting, eating, sleeping, etc has been challenging but fun – gets you really thinking about and imagining using the space. 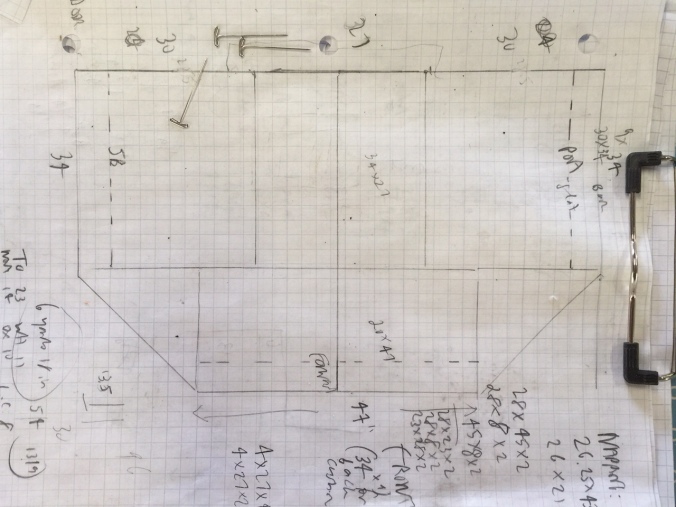 Rough sketch of bed/dinette – just turn your head a little to the right….

He zipped the framing together pretty quickly, puzzling over the joints and posts the most. After a casual conversation with Mr. Peplow on a trip to borrow his band saw, Ben came away with the idea to use birch plywood for the panels instead of luan and to clear finish them instead of painting. Ben gave the birch panels the beadboard treatment by running them through the table saw at 2 inch intervals (as he did on the closet and bathroom doors) and as of this very moment, the two side benches are complete and permanently installed. He’ll tackle the back bench next, and oh, those corner curves. Between 930 and 4, not on Sunday. 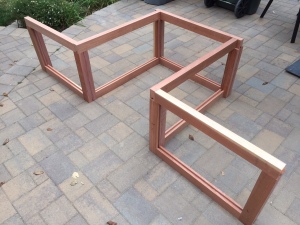 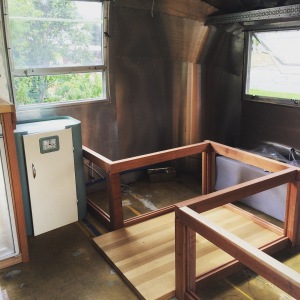 In place, ready for … 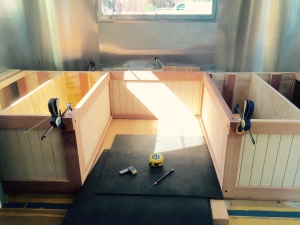 In the meantime, my cushions have seen much progress, with help from Rebecca at Sew LA, where I went to an open workshop class.  She thoughtfully pointed out not only what was wrong with what I had done so far, but two ways to improve- cramming more piping into my corners, so when you turn them right side out, there is plenty to go around; and more painfully, in order to get more accurate measurements on my cut pieces, I had to make and use paper patterns. You’d think a rectangle is a rectangle – how hard can it be to cut accurately? But fabric is slippery stuff, whereas paper isn’t. If you pin your fabric to paper, then cut, you’ll do better. Rebecca (with a third tip!) also suggested I up the quality of my fabric to something thicker, with a denser weave. So, my Project Runway dreams were, I won’t say fulfilled, but explored as I first trekked to LA’s garment district for better fabric, then patterned up. 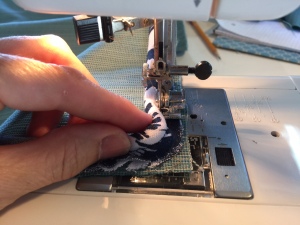 Cramming piping into the corner. 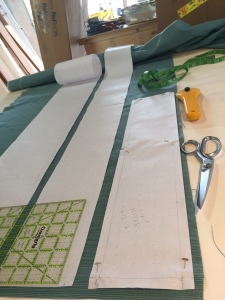 Patterns – paper pinned to fabric yields a more accurate cut it turns out!

Finally, we had some visitors this week, and while they are all special, some were actual celebrities! (A quintessential LA experience!) All agreed to pose for pictures below. Mr. and Mrs. Anderson, who live up the street and I used to babysit a ton for, came by for happy hour and Mrs. A. was the first to sit on the completed napping couch cushion! Cousin Michele Steele, based in Boston for ESPN but also a sub on SportsCenter, Uber’d over from work meetings in LA. (When I drove her back, traffic piled up because of a brushfire – sadly, like earthquakes, another quintessential LA experience.) A friend from high school was in town to give a book reading – you can purchase Liam Callanan’s latest on Amazon or preferably your local independent bookstore. And finally, Michelle, my neighborhood BFF from when I was a kid, was in town. I hadn’t seen her in years and hadn’t ever met her kids, to whom she is a celebrity, and to me too because she is getting her Masters in Math! Lots of catching up about our whether or not purple and red were still our favorite colors, Little House on the Prairie, bike riding, candy eating, Dodger games and Barbies. And about who dared who to eat (dry) cat food (she dared me, and I did). When Michelle was nine and I was eight, she moved four miles away (ugh) to a house with a pool (yay!) and we wrote each other letters. How sweet! 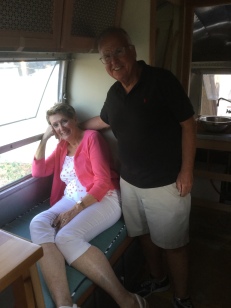 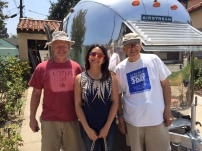 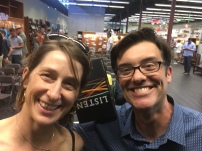 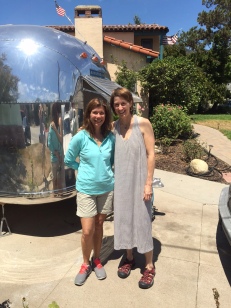 Last but not least in the construction updates, below is a little project that turned into a medium-sized one. Ben put the cabinet doors on the aluminum overhead cabinets. We used the same Union Jack aluminum sheeting that’s on the endcap shelves. Somehow completing this project just makes the interior look a ton more finished. Don’t you think? 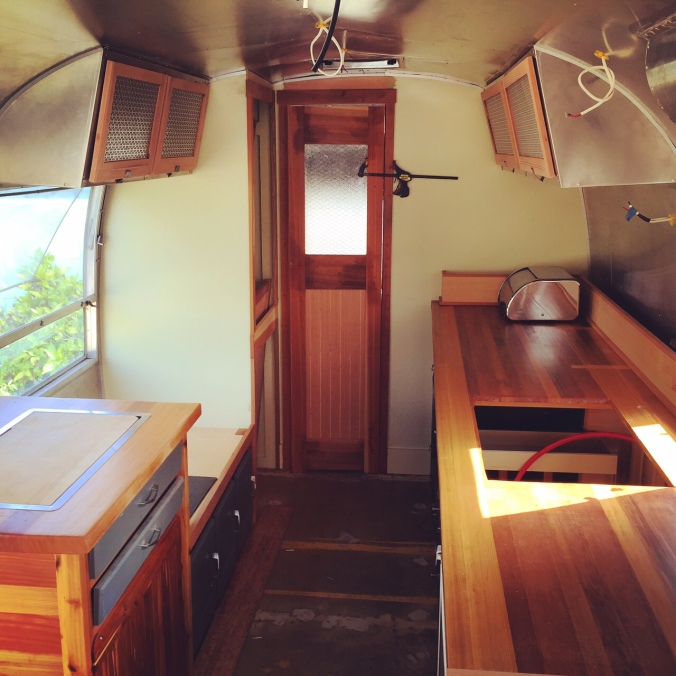 Knobs and latches still to come on those upper cabinets.

And to round out the recreation and shopping department, we finally made it to the Rose Bowl flea market – say it with me: another quintessential LA experience! It was not overwhelming, as we were fortified with breakfast burritos and lemonade. Some scenes below, including a few items that caught our eye, but were not purchased.

We DID however purchase the lovely Pyrex refrigerator dishes below. Prices really varied, but we were happy with the collection and deals we got. They will be put to good use, starting with looking pretty in this little vignette with a finished cushion and the dinette in progress, atop the now restored Westinghouse cabinet from last month’s flea market! So much progress! Until next time…. 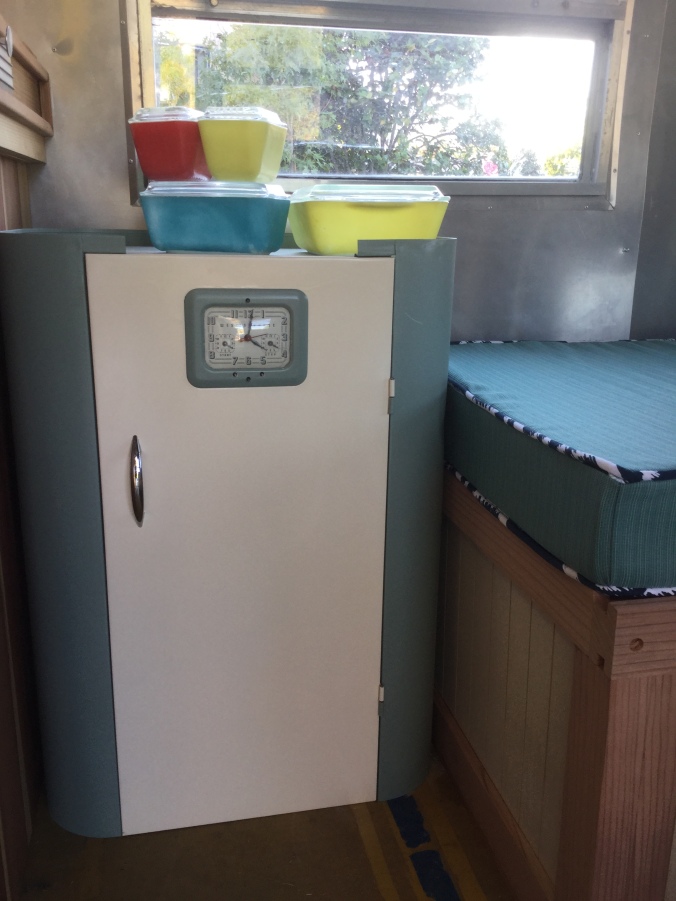 3 thoughts on “Some Quintessential LA Experiences (alongside, of course, Airstream restoration)”